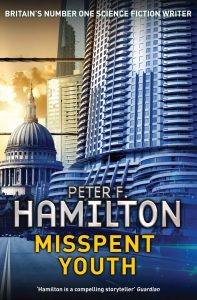 Peter F. Hamilton is probably best known for his huge, multivolume space operas, which is why I haven’t read that much of his work. But I did rather enjoy his Greg Mandel novels of the mid-nineties, which were pretty futurismic (except for the psychic business) and thoroughly entertaining page-turners. So I was pretty excited to sink my teeth into Misspent Youth (2002), a near-future novel just recently released in the US.

This one centers on a rich and famous family in the UK during a political turning point for the European Union. Jeff Baker, who notoriously revolutionized the internet by open-sourcing a data-storage technology that could have made him a mega-powerful gazillionaire (but instead made him merely a well-to-do and celebrated philanthropist), has been selected by a conservative’s nightmare of an EU government to be the first recipient of a rejuvenation treatment. The process will restore his eighty-year-old body to that of a twenty-year-old. On many levels, Baker’s moderate celebrity is being exploited by the tax-and-spend European government as a symbol of its strength and capability for achievement, but this plot business is (unfortunately) a sideshow. The A-story involves family conflict on the home front, as Jeff’s newfound youthfulness leads to severe consequences in his relationships, largely when he realizes that combining his fame and wealth with an attractive, twenty-year-old body can get just about any woman that he desires into bed with him. Unsurprisingly, this complicates his relationships, with his thirty-something, marriage-of-convenience trophy wife Sue, and — more centrally — his sulky teenage son Tim. Meanwhile, political tensions in the wider world bubble along in the background, and ultimately spill over into the Bakers’ privileged, upper-class lives.

The novel has some strong points: its detailed, unique depiction of an over-authoritative, left-wing European Union, its effortlessly read, simple prose style, and some nicely realized speculation on life-extension biotechnology and the future of the internet. But on the whole I found this a hugely disappointing novel. The chief, brutally fatal problem with it is that all of its viewpoint characters — each and every one of them — is a wealthy, beautiful, shallow, self-centered, sex-crazed, drug-addled idiot. Every one! Jeff Baker’s eighty years of experience and wisdom virtually evaporate along with his wrinkles, and he reverts to a dirty old man’s wish-fulfilment scenario instantly — the novel ignores a ripe opportunity to speculate on what it would be like for elderly minds to exist within youthful bodies. Tim, meanwhile, is a sniveling, hormone-crazed whiner. And these two characters, upon whose relationship most of the novel is built, are worshipped and adored by every inhumanly beautiful woman who waltzes into their world — and they’re all beautiful, as the endlessly sexualized character descriptions are quick to make clear. To call these women cardboard characters is giving them too much credit; cardboard, at least, is recyclable. These ladies are completely disposable, existing merely to tempt the men into making every stupid dick-thinking decision that will create melodramatic story conflict.

What a shame that all the interesting political, cultural, social, and scientific speculation in the book is relegated to the background of this Real World: Rutland soap opera. Only near the end of the book, as the less fortunate masses attempt to stage a revolution, do we get a first-hand look at the wider, darker future merely glimpsed from the privileged, comfortable periphery of the well-to-do Baker world, and it’s supposed to be an eye-opening experience for them. But by the time we get there, it’s too late — we haven’t seen the struggle, and anyway our “heroes” haven’t suffered much for the world’s problems. Their emotion and concern in the wake of all that’s happened is meaningless, because it’s simply impossible to care about them.

The title of the novel is definitely appropriate, but unfortunately youth isn’t the only thing misspent in this book. Give it a pass.