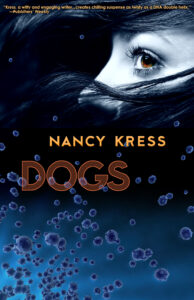 I’ve been a big fan of Nancy Kress’s work for years, particularly her near-future short fiction, and also her novels — especially her classic Beggars in Spain (1993) and the curiously overlooked Nothing Human (2003). Her latest, Dogs (2008), is a contemporary thriller with some SF elements. It’s set in a small town in Maryland, where a strange outbreak of vicious dog attacks quickly escalates from a local mystery to a national crisis. As the CDC, FEMA, and other government agencies descend on the town to investigate the canine virus, Tessa Sanderson — a retired FBI agent whose deceased husband was of Arab descent — learns that the outbreak may have a terrorist angle, and that she and her husband may be connected to what’s happening.

It’s a brisk, effortless read, with a promising premise, but ultimately it’s not that satisfying. The central conceit has possibilities, but isn’t given much more than a conventional Hollywood disaster movie treatment. The heroes of the novel — Sanderson, and the local animal control officer, Jess Langstrom — are generally sympathetic and proactive, but prone to questionable decisions that seem more about advancing the plot than entirely making sense. Meanwhile, the vast supporting cast — as in many such films — seems to exist largely to show how people, sometimes in spite of their better nature, react irrationally in the face of a crisis, putting individual concerns over the public good. This seems very deliberate; politically, the book reads as a vehement repudiation of Bush era policies and American greed and fear-mongering in the wake of 9/11. Unfortunately it doesn’t leave us with enough people to root for, which for me is the novel’s biggest drawback. The point is made but feels a bit shrill, even to my left-wing sensibilities. I really wanted to like this one, but it in the end it just didn’t connect.