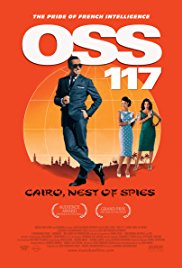 This week’s Netflix diversion is OSS 117, Cairo Nest of Spies (2006), a clever(ish) French pastiche of that particular brand of 1960s spy film that features swinging, dapper, super-slick heroes. Made to look and feel like a product of its era — perhaps its most successfully achieved ambition — the film’s Bond figure is Hubert Bonisseur de La Bath, a bumbler in the Maxwell Smart vein, played with amusing quasi-suave flare by Jean Dujardin. The death of his former WWII partner-in-adventure (cue incessant jokes implying homoeroticism here) triggers the adventure, sending him to Cairo circa 1955. His mission: to bring peace to the Middle East. (“No problem!” he exclaims.) Soon he’s in the field, entangled with a femme fatale (Bérénice Bejo) and the various intelligence officers of other European powers in the area, basically making a mess of things even as he thinks he’s saving the world.

It’s a well produced, fun, harmless picture that does a good job of taking the piss out of the cliches of spy cinema, as well as mocking the obsolete colonial attitudes of its characters. It isn’t nearly as clever as it thinks it is, and plays some of its jokes into the ground, but it’s redeemed by a classy look and winning performances, particularly from Dujardin. His priceless facial expressions occasionally elevate pedestrian jokes to laugh-out-loud moments; his finest moment, perhaps, is a spontaneous dance solo at the British Embassy.

The plot is at once absurd and predictable, and like a lot of over-the-top comedy it’s pretty uneven, but it’s worth a watch, particularly if you’re familiar with the material it’s spoofing.

February Fiction at Futurismic: “Erasing the Map” by Marissa Lingen