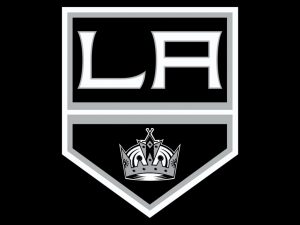 Jenn and I just got back from a hockey date at the Staples Center. I was hoping to get to post the “Kings Win!” picture we took last time, but no such luck. The Kings went down fighting, a 3-2 shootout loss to the Edmonton Oilers. However, we did get to witness a rarity — with the goaltender pulled, the Kings tied the game with about a minute remaining to get it to overtime. Aside from being horribly officiated (on both sides) it was a pretty good game, and we had fun.

In the true spirit of Valentine’s Day, there were three fights and several “scrums.” (I put “scrum” in quotes because Jenn still isn’t convinced it should be a word. Bonus points for a correct definition…hint: it has nothing to do with soap.)

All in all, it was a fun afternoon!