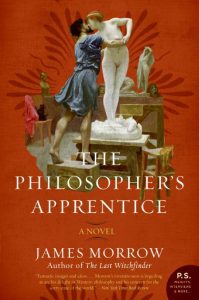 James Morrow rocks. If you’re unfamiliar with his work, he’s a brilliant satirist and fantasist, his work generally involving complex philosophical, religious, and political ideas. Using the tools of genre fiction, he wrangles with controversial arguments in daring, irreverent, and highly entertaining fashion. I don’t think I’ve ever been disappointed by his work.

That holds true with The Philosopher’s Apprentice (2008), a delightful gonzo fantasy about ethics and belief that continues his tradition of tackling the tough issues. This one stars Mason Ambrose, a Darwinist philosopher who, rendered an academic pariah thanks to an unfortunate rivalry, is recruited by one Edwina Sabacthani to tutor her daughter Londa. Londa, a peculiar teen who is something of a tabula rasa, ethically speaking, needs to be provided with a “moral compass.” And so Mason hies off to a remote, private island in the Florida Keys to undertake Londa’s ethics instruction, only to learn that his charge….isn’t entirely natural. Londa was in fact created, in Frankenstein fashion, by an “ontogenerator,” which essentially birthed her at age eighteen from the genetic material of her mother, magically pumped her full of knowledge, and unleashed her, a blank slate, on modern society. This gives her a curious and singular take on things, and, shaped by Mason’s lessons, she sets about changing the world.

It’s a wonderfully inventive, thought-provoking, and funny novel that raises questions — about abortion, faith, genetics, capitalism, environmentalism, and ethics, just to name a few speaking points — and examines them with fearless comic gusto. As usual with Morrow, on the surface it’s not for the right of wing, but Morrow’s lefties take their lumps too. And lest the presence of that familiar political dichotomy sour you to the idea of the novel, it’s also just a cracking good read; Morrow’s prose is weirdly old-fashioned and entirely modern simultaneously, hinting that somewhere underneath the surface of our mundane, casual reality, there are frighteningly smart, odd, curious people out there actually doing and saying these things. It’s one of those novels that just cries out to be read aloud. Anyway, it’s perhaps not for everybody, but for those for whom it’s, uh, for…highly recommended!