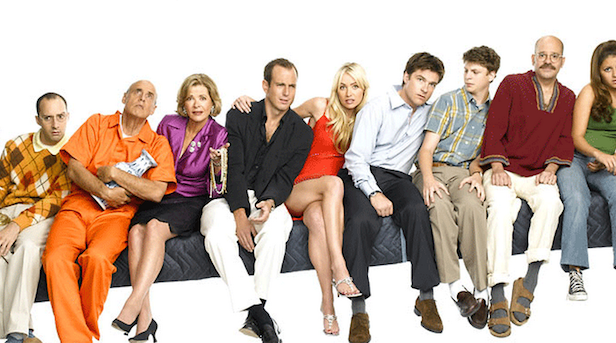 Consistent with my time-honored tradition of “discovering” shows only after it’s too late, I just caught up with Arrested Development (2003-2006), which joins Dead Like Me, Firefly, and Wonderfalls at the top of my list of Shows That Died Way Before Their Time.

We started watching this first on Hulu and ended up liking it so much we got the DVDs. The set-up is simple, involving a dysfunctional Orange County family whose real estate business is in a shambles following a corruption scandal. Michael Bluth (Jason Bateman, perfect as the show’s center of gravity) takes up the reins of the foundering corporation when his father George (Jeffrey Tambor) is imprisoned. He also finds himself trying, with equal measures confidence and ineptitude, to keep the family together.

It’s a pretty simple premise, made exceptional by inventive writing, crisp, fast-paced editing, and a superb ensemble cast. My favorites are probably Will Arnett (as Michael’s antagonistic ne’er-do-well brother Gob, a magician) and Michael Cera (as George-Michael, Michael’s son and the only innocent member of this self-centered family), but there’s great support from David Cross, Portia de Rossi, and Tony Hale, among others. It transcends it simple sitcommy premise with quick edits, an unpredictable, anything-goes attitude, Pythonesque conceptual continuity, and hilarious running gags, brilliantly spun to keep from getting old.

My review hardly does it justice, really. It’s one of those rare shows that starts strong and gets better and better — season three runs at a fever pitch right up until its final moments. Another sad case of a TV show too good to stay on the air; heartily recommended.