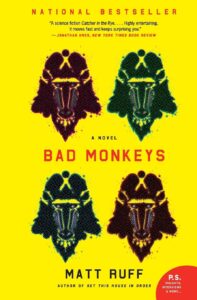 Bad Monkeys (2007) by Matt Ruff reads like a movie, and it’s a film I’d probably like to see: sort of The Usual Suspects by way of David Lynch, or maybe Jean-Pierre Jeunet, depending on which way you want to tone it. Told in flashback from a room of a hospital psych ward, it’s the story of Jane Charlotte, a drug-addled problem child, who relates to her interviewer the history of her recruitment and participation in a secret organization known as Bad Monkeys. The organization’s mission is to make the world a better place, and their M.O. largely involves quietly doing away with evil people — “bad monkeys.”  In the course of her narrative, of course, Jane quickly reveals herself to be the most unreliable of unreliable narrators, depicting the organization as something of a bizarre society with fantastical powers, that exists within the interstices of our mundane reality. Does this magic underworld exist, or is Jane merely out of her mind? Herein lies the story tension, and Ruff does a fine job keeping the reader guessing.

I rather liked this one, without quite loving it. As with the other Ruff novels I’ve checked out, it’s colorful and inventive and dazzling in places, and for the most part it swept me along on the strength of its ideas, humor and the promise of a big reveal. But it did bog down from time to time in talky exposition, and the ending — while not unsatisfying — also felt a bit kludgier than the careful build-up demanded. Ultimately, then, it didn’t blow my doors off (the way Sewer, Gas & Electric did, for example), but it’s a fun, worthwhile read, a taut and engaging film-on-paper. (Even better, I could see a liberal reinterpretation of its ideas making for a sick episodic TV show.)

March Fiction at Futurismic: “An Education of Scars” by Philip Brewer