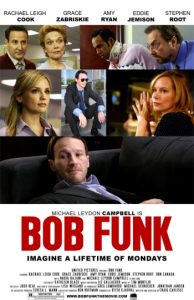 I’m a big fan of the Laemmle Theaters here in the LA area, and this weekend we met up with friends at the Sunset 5 in West Hollywood to see Bob Funk (2009), an indie comedy-drama that’s showing there on a limited engagement this week.

The film tells the story of Bob Funk (Michael Leydon Campbell), a ne’er-do-well alcoholic who works at a furniture company run by his mother (the wonderful Grace Zabriskie). Funk’s out of control habit interferes horribly with his work performance, and the film depicts his fall, recovery, and ultimate redemption — with the help of his family and friends. Expanded from a stage play (and it shows), it’s a good little indie film on a shoestring. The opening is a bit off-putting — oh no, here’s another outrageous comedy about an asshole I’m supposed to find charming! — but as Funk changes, so does the film, and it ended up winning me over in the end. Its chief strength is its cast — Campbell centers the film well, and there’s plenty of great, quirky support from Zabriskie, Rachel Leigh Cook, Eddie Jemison, Stephen Root, Amy Ryan, Nadia Dajani, and more. While it’s hurt somewhat by its minuscule budget — the office sets in particular feel like foreclosed businesses — and sometimes the staginess is intrusive, on the whole I found it a fun, worthy little film.

After the showing, the film’s writer-director, Craig Carlisle, as well as a producer and two of the actors (Campbell and Jemison) talked about the movie and took questions from the audience, a brief and entertaining discussion with much cheerleading for the support of independent cinema. (A great thing about living in LA is the opportunity to see events like this.) Then after the film, we headed across the street to Greenblatt’s for dinner and great conversation (plus the best pastrami sandwich ever). Overall a really fun evening!

March Fiction at Futurismic: “An Education of Scars” by Philip Brewer