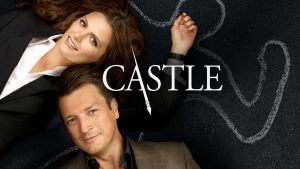 Monday night marked the debut of Castle on ABC, a police procedural (yawn) with a twist. The twist? It’s actually pretty good. The set-up is pretty simple: team up a charismatic rascal of a mystery novelist (Nathan Fillion) with a sexy-but-tough police detective (Stana Katic) and have them solve crimes together. It sounds banal — Murder, She Wrote meets Moonlighting, anyone? — but the pilot really works, thanks largely to some great sparks from the leads, engaging interplay between the characters, and a nicely clocked feel.

Detective Kate Beckett (Katic) catches a serial murder case; the killings appear to be based on crimes committed in the mystery novels of bestselling author Rick Castle (Fillion). Castle is called in for questioning, and later as a consultant, to help solve the case. If this last seems implausible…oh well, never mind! The mystery in itself isn’t all that interesting, but it’s also pretty incidental to the mystery-solvers, which is clearly where this show will live or die. Fillion’s smarmy charm and comedic timing are used to good effect, and Katic is quite likable in her own right. The show should get plenty of mileage out of their chemistry, regardless of the strength or weakness of its mystery of the week. Also promising is Castle’s family, particularly his vampy, boozing mother (Susan Sullivan) and his bright daughter Alexis (Molly Quinn), who looks to be the family’s voice of reason. In terms of setting the stage and introducing characters, Castle gets a lot of things right.

I found the appearance of Stephen J. Cannell (who appears as himself, one of Castle’s poker buddies) pretty astute stunt-casting, because the show felt like something Cannell might have created back in his uber-prolific TV writing days — a sort of Rockford Files for the 2000s, formulaic, perhaps, but charming and comfortable and fun. I read somewhere that in today’s imploding economy, risky serialized dramas with long story arcs aren’t going to be much in demand come pilot season. The networks aren’t looking for the next Lost or Heroes; they’re looking for the next Law & Order or CSI franchise (a depressing prospect, really). We could do much worse than to have shows like Castle emerge from this atmosphere; it could be just what the doctor ordered. I’ll probably stick around for a while on this one.