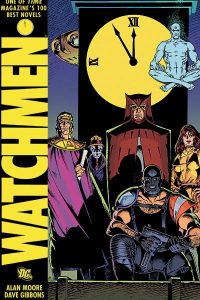 A couple weekends ago I saw Watchmen (2009), but it’s taken me a while to write up the review, for a couple of reasons. One is that I decided to read the 1986-7 Alan Moore comic book series it’s based on first, and another is that the story is pretty complicated! But here we go, finally:

I read comics quite a bit when I was younger, but somehow I never tried Watchmen, despite universally positive reviews from comic-reading friends. It may have been my Marvel-centric reading habits, or maybe my pointless contrarian tradition of resisting trusted recommendations only to “discover” them years later and feel like an idiot for having waited. At any rate, I went into the movie version of Watchmen (2009) with no preconceived notions. And I’m kinda glad about that, actually…I seem to like it more than some of the original series’ fans.

One thing’s for sure, Watchmen isn’t your typical comic book (at least, it wasn’t at the time it came out), and it’s definitely not your typical comic book movie (even now). Set in the mid-1980s at the height of an alternate Cold War, the story involves a group of superheroes, now disbanded in the wake of anti-vigilante legislation, who get drawn back into their pasts when one of their own, The Comedian (Jeffrey Dean Morgan), is murdered. The only remaining active vigilante, Rorschach (an intense and perfectly cast Jackie Earle Haley), concerned that someone might be “knocking off masks,” investigates the killings and warns his former partners-against-crime. But what at first appears to be a possible serial killing spree turns out to be a much more complicated conspiracy, as the disillusioned, mostly retired heroes find themselves drawn back into world events.

The plot is quite complex, and the story unfolds in intricate, extremely non-linear fashion, as the “present” track — the heroes investigating the conspiracy, against a tense backdrop of impending nuclear apocalypse — flashes back continuously to the history of this alternate universe, enabling us to learn the origins of the characters and their teams, as well as the vastly different political backdrop their existence has greatly influenced. As a viewer, the movie pushed all my happy Mission: Impossible analytical buttons, as narrative tracks and plot points ricochet across the screen to eventually reveal the puzzle, culminating in a mostly effective and genuinely surprising ending. In fact, I think certain details of the film’s ending were actually better than the comic book’s, and though I’m guessing many fans of the original are decrying some of the things that got left out of the film, I think the final edit made mostly smart decisions about what to cut. In light of the length and complexity of the source material, the film does an impressive job nearly accomplishing a next-to-impossible task condensing it all into a three-hour running time.

For all the deviousness of the plot and story, a big factor setting Watchmen apart from similar comic books — at least, the old group titles with which I’m familiar — is that it examines the moral questions of vigilante heroism in a much different way. Like many spy novels of the Cold War era, it asks the question: in the fight against evil, is it justifiable to use evil means? The “heroes” of this universe aren’t standard square-jawed good guys standing up for justice and the American way. They’re sociopaths, and mad geniuses, they’re glory-seekers and narcissists, and disaffected tools of the government, all with strained, sometimes twisted relationships with their “hero” status. The psychology on display in Watchmen makes Batman seem well adjusted. And that makes them all the more fun to watch.  (I can only imagine how much more impact these types of characters must have had in the 1980s, in the context of a much tamer comic book scene; we’re a lot more used to neurotic, gray area heroes nowadays.)

So the film, in terms of structure, visuals, sound (yes, even the period music, which I think actually worked in spite of myself!), story, and action, succeeded for me on just about every level. The acting was more of a mixed bag. Haley and Morgan are both great, I think, perfectly capturing their characters from the books, while Patrick Wilson (who plays Nite Owl) is probably the only actor to improve his character from what was on the page. Many of the other characters, unfortunately, deliver flat, unexciting, or overly affected performances. Beyond that, some occasionally unimpressive makeup work (that was Nixon? really?) and a tendency to over-show violence that the comic book more effectively implied are maybe my only real complaints.

Which isn’t to say it’s an otherwise perfect film, or that it perfectly captures the series. But, as a newcomer to the universe here, I found  it pretty satisfying. I would venture to say that if you’re at all a fan of the genre, the film and the graphic novel should both qualify as “required consuming.” 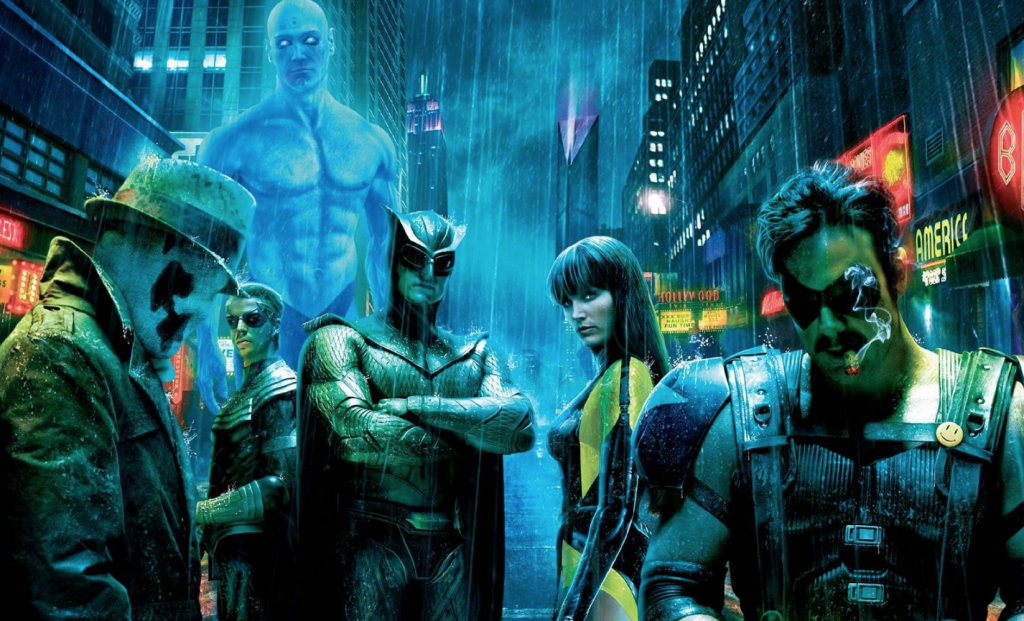