Novel: The Knights of the Cornerstone by James P. Blaylock 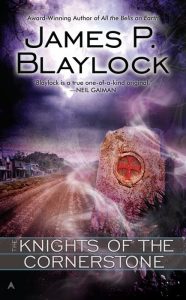 For a while it seemed like the supply of James P. Blaylock novels was  endless, a wonderful succession of quirky, clever contemporary fantasies about likable, befuddled schmoes finding their way into reality’s secret magical infrastructure, mixed up comically in mystic happenings beyond their immediate comprehension. A number of collections and omnibuses have come out since then, but it’s been a while since there’s been an original in the vein of, say Winter Tides or The Rainy Season.

Blaylock’s latest, The Knights of the Cornerstone (2008), is a welcome return to that style of work. It’s a short book, but it’s a quick, satisfying read likely to resonate with those already indoctrinated into Blaylock’s fabulist milieu, and probably not a bad starting point for potential new fans. The hero in this outing is Calvin Bryson, a thirty-something wanna-be cartoonist, just recovering from a bad relationship. Calvin is stirred from his somewhat aimless existence in suburban LA by communications from his curious relations, including his aunt and uncle, who live in the remote desert city of New Cyprus near the triple border of Arizona, California, and Nevada. Enlisted to deliver a package to this strange, backward little oasis, Calvin soon finds himself entangled in a secret war between rival factions for the possession of mysterious, magical artifacts.

It’s a nicely written novel, intriguingly plotted, and Blaylock deftly performs his trademark trick of painting a simple surface picture that hints at wonders and strangeness underneath the surface. I’ve always had a hard time putting my finger on why I enjoy Blaylock’s writing so much — in many ways it’s not my usual thing — but I think perhaps it’s the way he turns the mundane and the every-day into objects of intrigue, makes the act of walking through life feel like a clandestine operation with hidden motives and potentially dire consequences. He pushes my spy buttons, in other words, but in a curiously indirect way. The Knights of the Cornerstone once again connected on that level for me, pretty much delivering on everything I look for in a Blaylock novel.

Another Hockey Season in the Books