Novel: The Caryatids by Bruce Sterling 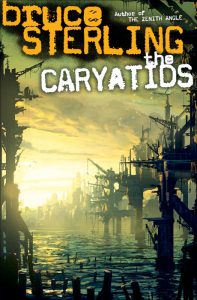 Bruce Sterling‘s remarkable new novel The Caryatids (2009) has enough near-future science fiction ideas for a few years’ worth of Futurismic stories. On the surface, it’s a clone novel, involving four  surviving “daughters” of a notorious Balkan woman, who created them in a bid to take over the world. Vera, Radmila, Sonja, and Biserka, rebelling against their god-playing mother’s original aims, have taken different life paths in a bid to shape the future of their world. Vera has joined the Acquis, a worldwide environmental collective dedicated to restoring the world’s environmental health; Radmila has become a famous member of the Dispensation, a celebrity-worshipping post-national capitalist worldview; and Sonja has become a fierce hero of the world’s last remaining nation-state, China, a brutal totalitarian throwback. Coloring the proceedings is Biserka, a wild and infamous criminal. Through their eyes, a troubled, fascinating future is displayed, and as the story moves forward, it appears as if these disparate characters — for all their differences, and they are legion — may have to come together in spite of themselves.

For all its engaging prose, the surface story is basically a framework upon which Sterling wants to hang his speculative futurism. The novel is broken into three main sections, each one examining three potential approaches to human efforts the world’s people might take in the harsh years ahead of us. The Acquis section, taking place on the small island of Mljet in the Adriatic Sea, depicts an extrapolated green movement committed to vast, important environmental causes. The Dispensation section, set appropriately in Los Angeles, shows a techno-capitalist response to the world’s rapidly mounting ills. And in China, brute government force in a harsh, fractious state is portrayed as another likely response to desperate times. So Vera, Radmila, and Sonja are essentially sociopolitical stand-ins for the worldviews Sterling wants to examine. Biserka, as a fringe mad bomber character, fulfills a similar function, representing radical terrorism.

That isn’t to say each section is without a satisfying narrative, but clearly there is an agenda to the book that goes beyond the surface action. It’s a deftly handled metaphor that comes together as the novel progresses. On the narrative level, it doesn’t appear at first as if the three separate threads are going to amount to anything — it lacks a connected, overarching plot with an easy objective, and the structure doesn’t seem to lend itself to pulling all the disparate elements into position for any kind of satisfying resolution. But the epilogue quickly reveals that solutions aren’t entirely the point, here, so much as methods and thought processes, hopes and fears and approaches. Sterling is extrapolating current trends in green activism, free-market capitalism, and nationalism out to their extremes, layering the macro onto the micro, and while he often seems to have a preferred viewpoint on these potential reactions to the world’s challenges, he’s refreshingly non-judgmental and even-handed in his speculations as he walks through his many characters’ shoes. Every side of the political spectrum takes its lumps here, and every side has its bright spots. Each worldview is ripe for satirization, and each is shown to have its strengths and  potential for good and brands of heroism in the face of the world’s monumental struggles. (Only Biserka, as the petulant, narrow-minded terrorist, comes off completely without sympathy.)

For all this, I’m probably not doing the book much justice, really. Suffice it to say, it’s a clever, rich, engaging, and satisfying blend of futurism, politics, satire, adventure, and invention, that raises many questions and examines many answers. If you’re looking for neat and tidy linear story-telling, this is probably the wrong book for you, but it’s got thought-provoking ideas aplenty, big and small, and an unconventional and well realized agenda. Great science fiction!