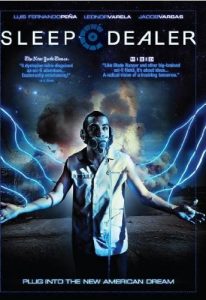 If I hadn’t seen it with my own eyes, I might not have believed a film like this even existed. Sleep Dealer (2008) is a Mexican science fiction film set in the near future. It may be the only true “Mundane SF” film I’ve ever seen, and while it can’t compete visually with what passes for SF in Hollywood these days, it’s a far better film — and certainly one of the best SF films I’ve seen in a long time.

The story begins in the Mexican desert, where young Memo (an understated and sympathetic Luis Fernando Pena) dreams of some day escaping his impoverished, backwards country existence to connect with the high-tech world of the future — for him, glimpsed only via snatched telecommunications intercepts from his jerry-rigged satellite receiver. When Memo hacks into the wrong transmission, though, he gets his wish in a way he never expected, and his journey takes him to the seedy, burgeoning border town of Tijuana, where he crosses paths with a beautiful young writer named Luz (an effective and equally likeable Leonor Varela). Luz sets him up with “nodes,” which enable people to interface directly with cyberspace, and are generally used for teleoperation of remote equipment. This provides wealthier countries with a kind of remote migrant labor force — whose prolonged interfacing in the “sleep factories” leads ultimately to blindness, seizures, and other physical problems. With no other choice, Memo falls into this life to support his family, but soon sees it for all its faults. Ultimately, though, circumstances enable him a chance to get back at the system — and make a statement about it.

It’s definitely a low budget film, but don’t let that stop you — while there are a few times when the low special effects hurts its credibility, for the most part the film loses nothing for its lack of high-dollar visuals. In fact, it’s at once more realistic and more effectively other for its creative, on-the-cheap look. This movie does more with less, and not just on the visual front. As a science fiction film, it meaningfully examines more speculative ideas than most of Hollywood’s last five years’ worth of genre films combined. Sleep Dealer confronts the imminent water crisis, multinational megacorporations, telepresence, VR-like memory trafficking, remote warfare, and more. This is SF with a conscience, and with a responsibility to the present. On many levels, it’s a bleak and dark look at problems the world is going to face — or, as it metaphorically suggests, is already facing — it’s also not without its hopeful message.

Sleep Dealer is in extremely limited release, but I highly recommend seeking it out — it’s definitely a unique and memorable film that should appeal to fans of good independent cinema and cravers of realistic, near-future science fiction alike. (Thanks for spotting this one, Steven!) 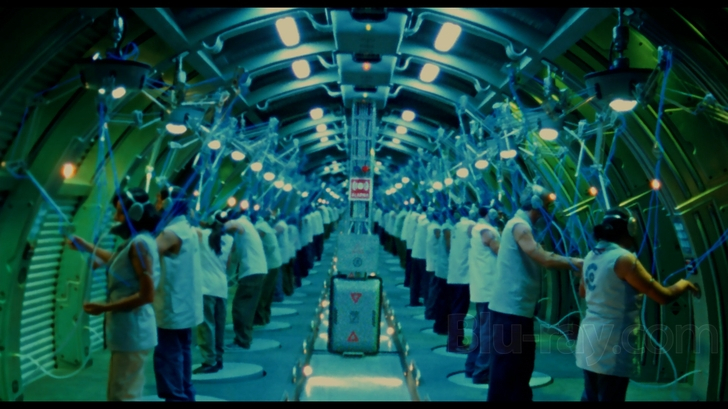 Aquarium of the Pacific

Novel: This Is Not a Game by Walter Jon Williams