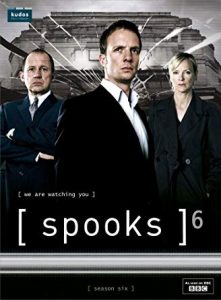 For the unindoctrinated, MI-5 (Spooks, in the UK) is a BBC spy series involving the domestic branch of the British Secret Service. Headed by ruthless, hard-nosed survivor Harry Pearce (Peter Firth), the team responds each week to the latest terrorist threat. In many ways, it’s a standard restore-the-status-quo thriller set-up. But in the best tradition of British espionage, it’s usually much more complicated than any simple save-the-day objective, as politics, personalities, allegiances, and emotions fuel and color the plots. To me it’s simultaneously a more realistic 24, a modernized The Sandbaggers, and a recognizable descendent of Mission: Impossible. But even while combining or reflecting all of the above, it is ultimately its own beast — and easily one of the best spy shows of all time.

The series started strong, and while some seem to think it’s gone downhill since the good old early days (say, season two-ish), to me it’s always been worth watching, with occasionally superb episodes popping up to make up for its perfectly watchable average shows, and maybe the occasional clunker. (And believe me, a clunker on MI-5 is far less painful to behold than a clunker on most shows.)

One of the series’ greatest strengths over the years, in my opinion, has been its ability — and, more importantly, it’s willingness — to reinvent itself. Sometimes there will be mission-of-the-week bottle shows, others multi-part cliffhangers; some characters last for years, others just weeks; many hours focus on the home front, while others venture abroad; just about every region of the world figures into its vast international scope; and all the while, the missions and politics and intelligence-gathering is colored by the personal lives and character arcs of its protagonists.

It’s a show, in other words, that’s unafraid to go new places, and in season six — which I finally just caught up with on DVD — they take that to another level, for the first time carrying off a season-long series arc. Running all ten episodes, the overarching threat of the season involves operations designed to prevent war between the west (particularly the U.S.) and Iran, hinging largely on Iran’s pursuit of nuclear weapons capabilities.

If this seems like merely veering into 24′s familiar waters, well, it is and it isn’t. Not being handcuffed by that show’s high-concept recipe, nor by its need to fill up so much more airtime, MI-5 is able to take its time with a continually escalating conflict. It does so brilliantly in season six, really a remarkable late-in-the-game surge from a show that’s been around awhile. All of the key players — particularly Adam Carter (the ever-effective Rupert Penry-Jones) and Ros Meyers (Hemione Norris, whose character I didn’t much care for at first but who really comes into her own in this season) — perform strongly with appropriate material. The season’s two new characters look promising as well.

I figured casual viewers that may have drifted away from MI-5 might be interested to hear that it comes back so strongly, so late in its run. A creative resurgence in season six? That doesn’t happen too often; it’s an impressive feat and worth hanging around to see.

Novel: The Caryatids by Bruce Sterling

Aquarium of the Pacific