Novel: This Is Not a Game by Walter Jon Williams 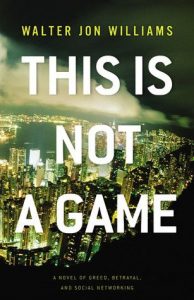 Ever since encountering “Panzerboy” way back in a 1986  (!) issue of Asimov’s, I’ve been enjoying the genre fiction of the versatile Walter Jon Williams, from his early cyberpunk books, to his ambitious far-future Aristoi, to his enormous disaster epic The Rift, to his sprawling military space opera series The Praxis. His most recent novel, This Is Not a Game (2009), ventures into near-future thriller territory, and revolves around the world of gaming. This is, dare I say it, a futurismic novel through and through — near-future SF, intricate plotting, contemporary issues, and games games games…could this be more my kind of book?

The protagonist is Dagmar Shaw, a designer of augmented reality games for a successful software corporation. Dagmar’s complex puzzle-solving adventures pit the online “Group Mind” against problems that weave fictional storylines into real-world situations, blending fantasy and reality. The players, working together or against each other, investigate, interact, and venture out into the real world in order to solve the games’ mysteries. The story opens with Dagmar on her way back to southern California from a game event in India. An unexpected layover in Jakarta escalates from an inconvenience to a dangerous adventure when Indonesia’s economic crisis creates turmoil in the city — and a revolution. Shaw’s clever extrication from this dilemma is just the engrossing tip of the iceberg, though, in a novel that later shifts focus to Los Angeles, where Dagmar’s connections with a group of former gaming buddies lead to schemes and murders and cons and double-crosses, all against a background of worldwide economic chaos.

Williams keeps a lot of balls in the air, and does so with an assured, brisk style that keeps the pages turning. Dagmar is a likable, resourceful hero and she’s surrounded by a deftly drawn supporting cast. Unfortunately some of the twists — and there are a number of them — are easy to see coming, but I didn’t find that terribly disappointing. Often the “how” is more interesting than the “who” or the “why,” so I was perfectly happy to watch things unfold even when my guesses were correct.

Outside of the mystery plot, there’s also the well drawn, right-around-the-corner near-future scenario, and the engaging focus on the gaming world. Gaming groups, role-playing games, online mmorgs, and augmented reality games all figure in, and Williams does a credible job describing the gaming culture. On the broader, thematic level, the novel suggests that we are a world of game-players, with reality as the board — and we should be careful how we play. Overall, it’s a solidly conceived and executed novel, appealing on a number of levels and across multiple genres.

May Fiction at Futurismic: “Under an Arctic Sky” by Stephen Gaskell