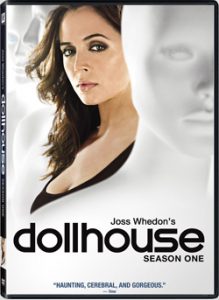 It looks like Dollhouse has been renewed for a second, 13-episode season. Some will disagree with me, but I think it’s good news! After watching the pilot, I came away disappointed but hopeful. With the first season in the books, I’m still not entirely convinced, but it definitely got better as the season went along. My nutshell impression: I definitely don’t love the show, but it’s occasionally strong and always conceptually intriguing. There are still a ton of possibilities to explore with the idea, and I’m intrigued to see how they continue to develop this problematic but interesting premise.

Some random thoughts about season one:

Anyway Dollhouse definitely hasn’t captured my heart the way Buffy and Angel did, but to be honest the first seasons of those shows weren’t pure gold for me either — and the second seasons really caught fire.  (If only Firefly had gotten that chance…) I’m looking forward to season two; hopefully it will continue to improve as it goes along.