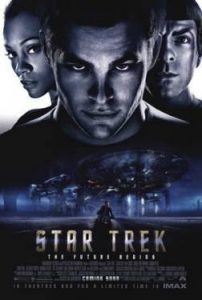 On Saturday we met up with friends at the Arclight to see J.J. Abrams’ Star Trek reboot. In general, I’m not a big fan of reboots* — every successful reboot, I think, “validates” Hollywood’s tendency to greenlight old ideas over new ones, sigh — but even so, I have to admit the Star Trek reboot was pretty fun.

No need to go all plot summary on this one, really — if you’ve seen the original Star Trek, you’ll know largely what to expect. Suffice it to say the central conceit cleverly relaunches the franchise, and the films riffs off the old formulas amusingly. I also thought it was very well cast, with the new versions of the old characters generally both recapturing them and bringing a little something extra. (In particular, I got a kick out of Karl Urban as Dr. McCoy.) The science is…well, heh. And like many blockbuster films these days, sometimes it overdoes it on the visual effects, so wrapped up in what can be done it forgets to make it look believable, or, you know, let us see what’s going on.

But, on the whole, it’s an enjoyable new spin on the old Star Trek universe — Abrams is definitely a canny hitmaker.

* Not that I wouldn’t love to see Mission: Impossible re-rebooted for television, sans Tom Cruise. But then, if you know me, you’ve probably already inferred this.

There Is No Pile of Slush