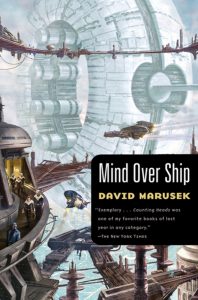 Mind Over Ship (2009) by David Marusek is the sequel to his highly inventive debut novel Counting Heads, and my only real complaint about it is that the story follows right on the heels of its predecessor without much in the way of a recap. In light of the complexity of this world, this is one novel that could have used a “previously on” summary. Anyway it took a while for me to re-immerse myself, but once I caught back up, I was fully onboard. (That said, if you haven’t read either of them, I highly recommend reading them one right after the other.)

Marusek’s work was a major influence on me in the heady, early days of my post-Clarion, world-conquering delusional state (oh would that my SF was half as accomplished!), and it was certainly a huge inspiration for Futurismic. His visions of the future are vibrant, edgy, busy, funny, brave, scary, and — perhaps most importantly — truly forward-looking. At the peak of my frustration with short-form science fiction’s tendency toward the nostalgic in the late 90s/early 2000s, Marusek’s stories were among the few that actually seemed to be building tomorrows that felt as if they were extrapolated from contemporary conditions, rather than on recycled tropes, future shock, or crusty wish-fulfillment.

One of those stories, and perhaps Marusek’s most famous, is “We Were Out of Our Minds With Joy” (what a great title), and Counting Heads is an expansion of that unforgettable tale. Its world is characterized by a burgeoning clone economy, runaway nanotech, vast overpopulation, wildly advanced telecommunications, ruthless and ambitious megacorporations, and truly ubiquitous surveillance, among many, many other things.

Mind Over Ship (what a, well, not-so-great title) picks up right where Counting Heads left off, focusing on many of the major characters of the first book: chiefly Fred Londenstane, the notorious “russ” iterant who famously went off-task and is now a walking pariah in clonedom; but also his wife Mary, a member of the unstable “evangeline” germline; Ellen Starke, the beheaded (and re-headed) leader of Starke Enterprises; and Bishop Meewee, Starke’s right-hand man. The central storyline involves an enormous capitalist venture to seed the galaxy with Oships, filled with cryogenically frozen colonists, an enterprise already heavily underway as the novel begins. Corporate rivalries, however, threaten the project, leading to much backstage maneuvering by the participant powers to leverage it. Meanwhile, the hapless iterants Fred and Mary are struggling to make sense of their altered circumstances, as the stability of the clone economy faces unexpected new stresses.

If this doesn’t sound interesting enough to you, you can trust it’s my writing’s fault, not Marusek’s. Once I got swept into the flow of invention again, the book clicked along engagingly, with new surprises and big ideas on every page. Marusek’s world-building is so detailed and fascinating that even the old lifeship chestnut felt freshly imagined to me. On some levels, the novel isn’t all that structurally satisfying — throughout, I had a difficult time finding the “shape” of the story. Instead, it feels more like a succession of inventive, connected episodes leading to an unexpected but quite satisfying end, which ultimately ties together many of the various ideas and subplots. It could be that the profusion of ideas and characters make seeing the wood for the trees more difficult; indeed, by and large Marusek’s information-rich style is perhaps better suited to the short form. On the other hand, the unpredictable, runaway train unfolding of events does seem more consistent with reality, which makes Marusek’s vision seem that much more relevant and in touch. Whichever way you slice it, I closed the book happy and eager for more. (I hope it doesn’t take another four years, but if it does, at least this time I’ll have a record of my impressions to look back on!)