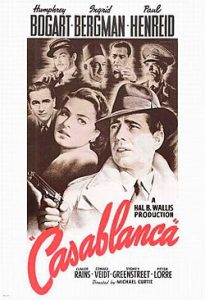 Just about everyone I know who’s seen Casablanca (1942) has told me it’s one of those films that everybody should see. Even though I only watched it on a tiny seat monitor, I can now concur: see it. This is a great movie, and it’s even greater if you dig classic films, espionage, romance, noir, World War II era movies, Humphrey Bogart, Ingrid Bergman, or any combination of the above.

Set in Morocco at the height of Nazi power during World War II, the story centers on a tavern run by bitter American expatriot Rick Blaine (Humphrey Bogart). Morocco is technically neutral and policed by French colonials, represented by the affably corrupt Captain Renault (Claude Rains), and Casablanca has become a popular jumping-off point for refugees attempting to escape Nazi oppression. Rick is an outwardly bitter soul, strictly neutral on the surface, although it appears there may be chinks in his armor — which are stressed when a combination of circumstances thrust a pair of exit visas into his custody, via the seedy Ugarte (Peter Lorre). This, combined with the arrival of Rick’s old flame Ilsa (Ingrid Bergman), a Norwegian escapee with whom Rick shared a whirlwind romance in Paris just before the Germans invaded, thrusts him into the middle of the conflict — on the fringes of the war proper, but in the war nonetheless — leading to hard, hard choices.

This is just a beautiful, beautiful film in every respect: its look, its story, its perfectly cast actors, its highly stylized and unforgettable dialogue. Bogart is brilliantly roguish in the central role: the barkeep with the heart of gold, toughened and unforgiving on the outside, but internally noble and sentimental.  He’s surounded by an able and memorable cast of characters: Bergman is stunning, Rains charming, Lorre shifty and clever. It’s pretty much perfectly structured, filled with memorable scenes, highly quotable dialogue, and stirring images throughout, and its final moments are inspiring. Definitely a must-see! 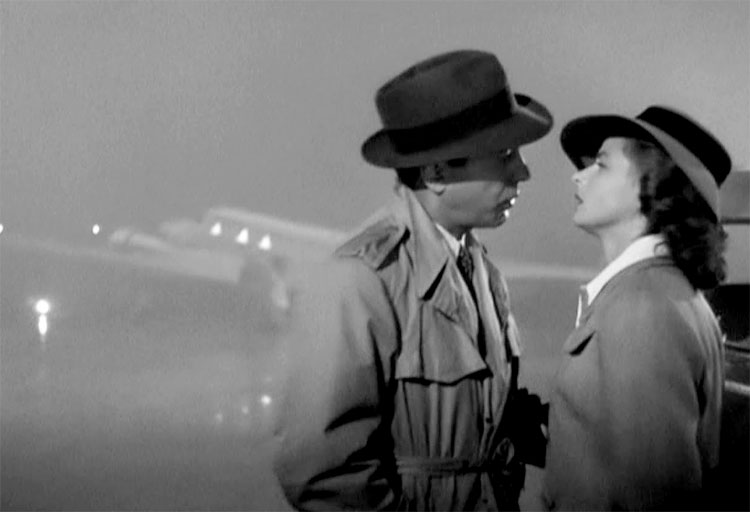 The Trip Out: LAX, Newark, Manchester