The Trip Out: LAX, Newark, Manchester

The trip started a couple Saturdays ago, when Jenn and I loaded our luggage into the car and drove down to LAX to catch the first leg of our flight overseas. Sensing our departure, Cairo attempted to stow away in Jenn’s luggage: 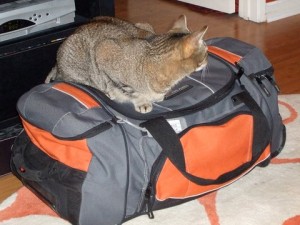 Evidently we missed the worst of the Memorial Day traffic by leaving on Saturday instead of Friday. I’ve never had such an easy time getting through security at LAX; the Newark terminal where we spent our layover was practically a ghost town (by LA standards, anyway), and there were no delays or problems on either leg of the trip.

We flew Continental, and I was impressed. There aren’t a lot of things I hate more than plane travel, but this time the experience was downright pleasant, and the service was definitely a cut above. The planes seemed to be newer, and a little bigger, than the typical domestic flight, and the seats were all equipped with entertainment-on-demand touchscreens. The movie and TV selection wasn’t particularly eclectic, but it was reasonably large, so it was pretty easy to find things to occupy the long hours. The seats also had laptop plugs, and it seemed like the attendants were constantly serving food and drinks. Although it was definitely airline food, it was vastly superior to the rock-like, inedible “snack boxes” I’ve had on other carriers — most of which don’t even serve anything, these days. Add to this that Jenn shrewdly re-seated us in exit rows when we checked in online, giving us extra leg room, and I’d have to say the trip from Los Angeles to Manchester was among the best flying experiences I’ve ever had.

Figuring in the drive down to the airport, security, boarding, flying, a three-hour layover in Newark, and more flying, we didn’t reach Manchester until basically the next morning. Our plan to sleep on the second leg of the flight proved impossible — I can’t sleep on planes generally — so I was pretty wiped when we went through customs. (I really don’t think I ever got adjusted to UK time; a week later, on the way back, I slipped back into the Pacific time zone pretty effortlessly.) Customs was relatively painless, although the guy was pretty miffed that we didn’t know the street address of the place we were staying. (I won’t make that mistake again!) But they let us into the country, so huzzah: my first passport stamp!

Coming up: movie reviews from the plane, and Yorkshire.