Toward the end of our week, Jenn and I organized a quick day-trip to London. We traveled by train from Leeds to Kings Cross Station in London, then navigated the Underground down to our insanely huge and extravagant hotel, the Royal Horseguards: 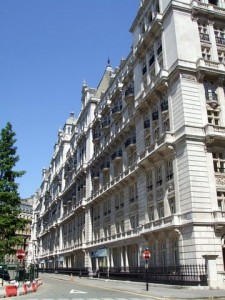 This is in a very touristy area, well within easy walking distance of the Thames, Trafalgar Square, Covent Garden, scads of museums and theaters and historic buildings, and countless other attractions. We visited as many of them as we could in our two half-days. Photos from London: 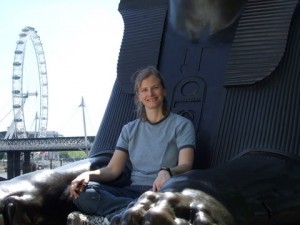 Jenn, near the Thames with the Eye in the background 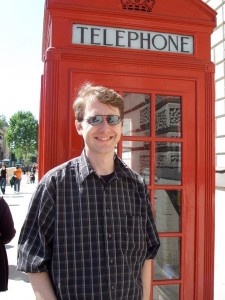 A highlight for me was our visit to the Churchill Museum and Cabinet War Rooms. Here they’ve restored the bunker from which the Churchill government directed the war effort during WWII. Audio handsets conveniently describe each exhibit so you can tour at your own pace. My favorite room was the map room: 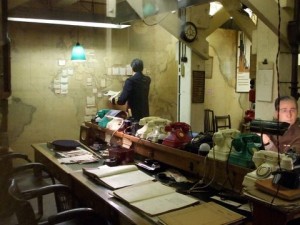 Don’t worry, those are mannequins…they’re not still taking shelter from the Blitz.  🙂 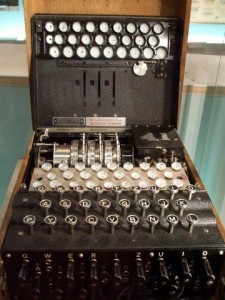 Here’s an enigma machine. This is just wicked cool, and the accompanying display was even cooler. It’s a really, really good museum if you’re interested in the subject and you get the chance. 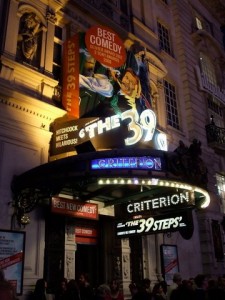 Above is the marquee for the Criterion, where we saw The 39 Steps. It’s an enjoyable stage recreation of the Hitchcock film, very clever and meta, with four actors playing all the roles. The suspense setpieces were creatively and amusingly recreated. 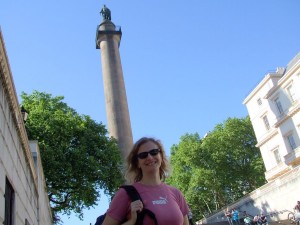 One more of Jenn, in the shadow of a huge monument near Piccadilly (not sure which one this is). We jam-packed our time in London and I still don’t think we did a fraction of a percent of all the things there were to do…awesome trip!