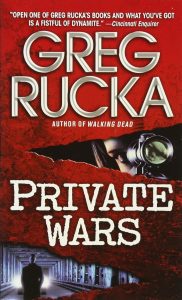 I like to bring page-turners with me when I’m traveling, and based on my reaction to the first Greg Rucka Queen & Country novel, I figured its sequel would be a good bet. I was mostly right: by and large, Private Wars (2005) is a brisk, enjoyable read in the mode of its predecessor. But I found aspects of it troubling, and overall it didn’t connect with me as strongly.

Following the dramatic events of the last novel (as well as several subsequent comic book issues), Rucka’s super-spy Tara Chace has retired to the English cou ntryside to raise a child and recover from traumatic experiences. Chace’s resignation has left the Special Section of SIS, headed by acerbic, shrewd survivor Paul Crocker, in a sorry state: the new head of section is a political appointee and isn’t up to snuff, and Minders Two and Three are still too inexperienced to handle department leadership. Meanwhile, there’s a new Deputy Chief, and a new CIA Head of Station, which have transformed Crocker’s bureaucratic battlefield. When an under-the-table operation comes his way, involving a regime change in strategically important Uzbekistan, Crocker sees a chance to do some good, and also improve his career prospects. Carrying out the mission, though, involves luring Chace out of retirement, which takes some doing — but once Chace is on board, the adventure launches in earnest, as she inserts herself between rival siblings vying for power in central Asia.

Although it has many of the elements that made A Gentleman’s Game successful, and is certainly diverting and fast-paced, for some reason this one didn’t win me over to the same extent. For one thing, the operation, which involves determining which successor to an ailing president will take over upon his death, is difficult to get all that excited about. More problematic, for me, was how much of the plot turns involve revenge and violence. Revenge was a major factor in A Gentleman’s Game as well — its mission a message-sending response to a severe terrorist attack on London — but in this case it takes a more personal turn, when Chace gets into a private war with an evil henchman of one of the Uzbek heirs, Zahidov. Captured during an action in which she ruthlessly kills numerous members of Zahidov’s team, she is subsequently abused and tortured by him, barely escaping with her life thanks to a last-minute intervention. While Zahidov’s behavior is unquestionably despicable, and it’s certainly easy to root for his comeuppance in light of his treatment of Chace (and others), to me, on a certain level, Zahidov’s vicious, merciless behavior isn’t all that far removed from the machine-like killings Chace carries out. It’s a problem I have with many thrillers and suspense shows or films — Taken, actually, is a perfect example — wherein the Hero, simply by virtue of being our viewpoint character on the right side of an argument, has carte blanche to brutally murder anyone who gets in his path, even if the motive for doing so places the one above the many. Don’t get me wrong, Chace’s antagonist in Private Wars is a torturer and wanton killer, who has in the past raped his interrogation victims. It isn’t that he doesn’t deserve whatever he gets; he does. But does this excuse Chace’s remorseless killings, which in many cases come across like honorless, fatal sucker punches, merely in the context of a meddling political operation? Or, even if they are in retaliation for the villains’ past abuses? It seems like both sides of fence are equally guilty of perpetuating the violence, and escalating it without regard to collateral damage, never with a thought toward a nonviolent solution.

Anyway, much more interesting and engaging for me in the Queen & Country universe are the corridors of MI6: Crocker’s schemes, his interactions with the other major figures of the service, the teamwork in the Ops room, and the considerably more human personalities of the other Minders. These are the parts of The Sandbaggers that I really liked, and it comes across more strongly in the comic books. Rucka handles these scenes well in Private Wars, and I invariably find them more interesting than the action sequences and the operations themselves, but unfortunately they always seem to run subservient to Chace’s relentless wetwork. I, personally, would like to see more intrigue and less combat.

So, many complaints perhaps, but setting them aside I still really like this universe, and I’ll keep following it, provided it continues. At the moment there doesn’t appear to be another novel out, but I do still have another volume of the collected comics to catch up on.