Collection: Shuteye for the Timebroker by Paul Di Filippo 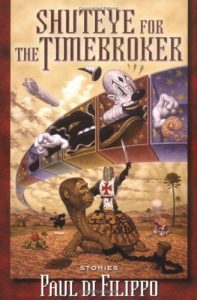 Genre writers don’t get much more prolific, versatile, or flat out fun than Paul Di Filippo, whose diversity and literary fearlessness never cease to amaze me. I just caught up with Shuteye for the Timebroker (2006), his tenth (!) full collection. Although typically inventive, this one felt minor compared to some of his other collections, like when a band you love releases a bunch of studio outtakes which don’t really add up to a true album. Di Filippo’s trademark creativity is on display as ever, but to me Shuteye just isn’t as uniformly impressive as some of his more strongly themed collections (the essential Strange Trades coming first to mind, followed by the wonderful Ribofunk).

I didn’t detect much of a theme to this collection; it’s an even mix of genre stories, the fantasy tending toward the whimsical and the contemporary, while the SF is generally of the Twilight Zone-ish variety, and perhaps a tad darker. Probably my favorite of the bunch is the fierce “Shadowboxer,” in which a man with the ability to kill with his mind is put to work for the government, an effective and chilling tale. The most satisfying storytelling in the collection, though, comes from “The Secret Sutras of Sally Strumpet,” an engaging novelette about a male writer whose fictional chick-lit pseudonym comes to life and takes over his ill-gotten career; a slick premise nicely realized, if marred by iffy gender politics.

Indeed, many of the tales of Shuteye are typically groovy Di Filippo idea stories that don’t quite hit the bullseye. Take the opening fantasy tales, “Captain Jill” and “Billy Budd,” for example, previously unpublished stories from his short-lived Blackwood Beach series, which is centered on a mysterious Atlantic coastal town, a kind of Twin Peaks for New England. In the former story, a notorious female pirate is awakened in a man’s basement after years of magical slumber. In the latter, a man who is half-plant attempts to seed and nurture a perfect female partner with whom to share his life. Both stories generally execute their premises well and possess an inherent likability, but both overstay their welcome, too long for what they accomplish. “Distances,” meanwhile, is similarly half-satisfying, a ballsy and ambitious early experiment in which SF writers extrapolate future SF writers extrapolating farther future SF writers, on and on; it’s an impressive feat that simultaneously feels too much like an exercise. Also populating the collection are a number of stylistic homages, some indirect, others more targeted, with many a nod and a wink to other writers. “The Mysterious Iowans” (Verne) and “The Days of Other Light” (Poe), for example, are earnest nods to their ancestors, but I showed up to read Paul Di Filippo, you know? It’s certainly not without merit, but on the whole this one was a bit disappointing to me; one for the Di Filippo completist.