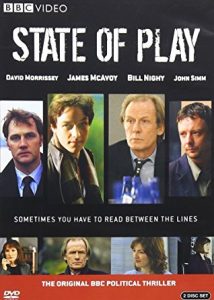 If you’re in the mood for intricate, intelligent drama, you can do far, far worse than to check out State of Play (2003), a six-episode BBC miniseries involving journalism, political scandal, complicated relationships, ethics, and more. It might be the last of the great newspaper dramas, wherein a random-seeming event snowballs unexpectedly into the story of a lifetime, as a team of reporters gradually disentangles a convoluted web of intrigue to get to the hard truth behind a young woman’s death.

When a young researcher for a government energy committee, Sonia Baker — something of a “Laura Palmer figure” for the series — is killed by a train in the London Underground, at first it seems like simply a tragic accident — until evidence comes into the possession of journalist Cal McCaffrey (John Simm) that might link her death to the shooting of a young boy on the same day. Baker’s boss, politician Stephen Collins (David Morrissey), is an old friend of McCaffrey’s, which puts McCaffrey in a unique position to get to the heart of the story, which becomes more complicated when Collins admits to having had an affair with Sonia. Torn between his friendship with Collins and his journalistic ambition, McCaffrey doggedly pursues the story, with the help of his staff (which includes a feisty Kelly Macdonald and a smarmy James McAvoy) and, less directly, his editor (the brilliantly shifty and amusing Bill Nighy). Each new piece of evidence makes the story more and more eye-opening, eventually leading to an explosive emotional climax.

It’s a superb drama, which tells a compelling, propulsive narrative, which is also deviously complex, and in the meantime examines the ethics of journalistic behavior in the pursuit of the truth. Indeed, McCaffrey and his team are as crafty and ruthless as any team of spies, and deploy every trick in the book to get the information they need. But McCaffrey, entangled as he is by his relationship with Collins and Collins’ wife (Polly Walker), gradually comes — as the viewer does — to see the human cost of his actions, which colors any professional success he may achieve.

Crisp writing, strong characterization, and terrific acting help sell the story — I was particularly impressed with Morrissey as the emotionally shattered M.P., and Marc Warren, who is fantastic as the profoundly paranoid key witness, Dominic Foy. I found it thoroughly engrossing stuff and well worth the five-hour commitment.

Don’t confuse it with the big budget film of the same name that came out recently (starring Russell Crowe and Ben Affleck); I didn’t see it, although I have to admit I’m intrigued to see how they condensed it, and what kind of Hollywood casting they tried. Maybe for another post. But really I can’t imagine how they could have improved the original. Go to the source (no pun intended)! 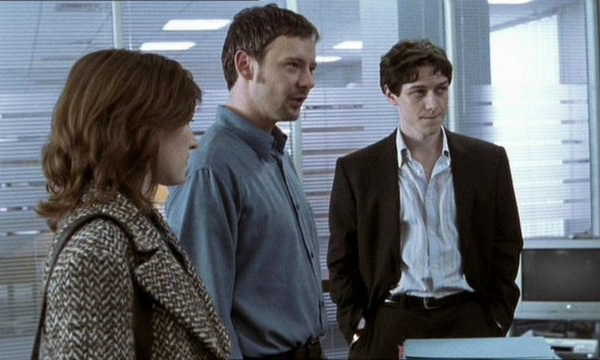