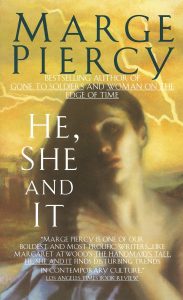 He, She and It (1992) is my first experience with the work of Marge Piercy. I had something of a mixed reaction to its science fictional content, but on the whole I found it a strong, thought-provoking novel.

The world of He, She and It is a dystopian, near future United States. The federal government has vanished, global warming and pollution have decimated the environment, vast segments of the population live in a lawless urban sprawl, and huge multinational corporations vie for power and control. The narrative kicks off when Shira Shipman, a technician specializing in human-machine interfaces for one of the largest multinationals, loses custody of her son in a divorce and finds herself cut adrift from an ill-considered path in life. She returns to the community of her youth, Tikva, a Jewish free town that has managed to maintain its independence by selling superior computer security to various multis. There, Shira goes to work for a scientist, Avram Stein, helping with the development of a cyborg, Yod, with whom she develops a complicated relationship. Meanwhile, Tikva is under assault — mostly via cyberspace — by multinationals looking to absorb its talent and technology. Yod was developed in order to help defend the town, which puts Shira in the middle of wars both political and actual.

I found myself struggling to get into this one at first, as the early stages of SF world-building felt a bit clumsy and overly expositional; it kind of felt like “SF as a second language,” the author discovering familiar tropes and describing them as if they were brand new. Ultimately I don’t think that’s a fair judgement, though, because once the groundwork is laid, Piercy handles the material adroitly, and the novel addresses numerous classic SFnal issues quite effectively. However, I think if you have strongly developed SF-reading filters, the early infodumps ring false.

I also thought the SF content of He, She and It was curiously unstuck in time — even today, seventeen years after its publication, it feels as if it could have been written anywhere from the 1970s to the 2000s. In some ways it feels very forward-looking, in others oddly dated. Piercy’s take on the environmental crisis, for example, seems slightly ahead of the curve of mainstream thinking; the book’s cyberpunk influence makes it feel very much a product of its time; the social consciousness seems very much a hallmark of 1970s SF; and, to really reach back, the cyborg Yod can be seen as a reconceptualized Frankenstein’s monster. I came away from the book feeling like it could have been released just yesterday or re-released from an original publication forty years ago. In the end, I think this is a good thing — the ideas and issues it deals with are timeless, in other words — but for some reason I found it occasionally off-putting. I think I kept expecting the book to settle into an era of the SF canon, and it never really does.

Still, while I found the world-building and the timeliness of the SFnal content slightly problematic, the novel clearly succeeds as science fiction, particularly in its examination of the central premise — which is not its world, or its occasional cyberpunk flavor, but its complex and well thought out look at the ethics of creating artificial life for human purposes. Yod, the cyborg at the heart of the story, is a strongly conceived character, and used to good effect in examining these issues, at the core of many practical and philosophical arguments, and his plight raises many thought-provoking questions. Piercy emphasizes this theme in an alterate track narrated by Shira’s grandmother, Malkah, in which she tells Yod a story of a magical golem created to protect a Jewish ghetto in Prague in the 1600s. The introduction of this additional, historical storyline contributed to the book’s slow opening for me, but quickly became an effective part of its structure, accenting and illuminating aspects of the future track.

The religious elements also contribute to the novel’s unique atmosphere; I found it quite refreshing to see religion in the future. It says something, perhaps, about how infrequently that’s dealt with in future SF.  (Either that, or I’m just an overly secular kind of guy.) The novel is also swarming with memorable, well developed characters. The emphasis is on strong, empowered women, but even the men — if slightly more villainous in their somewhat single-minded ambitions — are interesting and dynamic. My only struggle here was with Avram, the scientist chiefly responsible for Yod’s development, who seems unrealistically incapable of understanding the extent of Yod’s capacity to think and feel and want and need. If Avram is such a brilliant scientist, shouldn’t he be more sensitive to his creation’s capacity for human-like traits and behaviors? I wasn’t entirely convinced by him, and I’m not sure why he was chosen to represent the cold, heartless side of the argument about Yod — which was necessary to the conflict, but didn’t strike me as a true scientist’s behavior.

I wouldn’t say I loved this one through and through, but it’s a well written, effective, and ambitious novel, and it definitely got my gears turning.