Old Friends and a New One

An eventful and enjoyable Sunday!

I spent most of the day down in West Hollywood reminiscing with old high school friends, some of whom I hadn’t seen for twenty years! Not too long ago, in my hometown of Fredonia, a class reunion was held but many of us on the west coast couldn’t make it. We did our best to make up for it yesterday and I had a lot of fun catching up and sharing stories of our western New York roots. It still amazes me, years later, how lucky I was to grow up in a town full of so many creative, interesting, fun people; I so took it for granted back then.  Heya folks: let’s do that again sometime soon!

From old friends to new: Jenn and I adopted a new kitten! So far we haven’t officially named him, but for now he’s “Arthur” (the name his foster mom gave him): 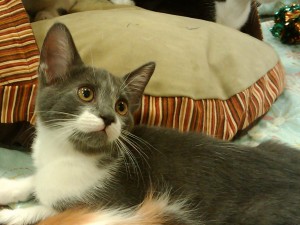 “Arthur” is a friendly and curious fellow who will purr at the drop of a hat. He’s adapting quickly and nicely to his new home. Sadly, the same can’t be said for our four-year-old cat Cairo, who isn’t terribly happy about having to share his house with a new stepbrother. We’re hoping in time the two dudes will start hanging out, but for now, we’ve got them in separate rooms and are hoping to integrate them gradually into each other’s lives. It will take time, but I think it will work out eventually!