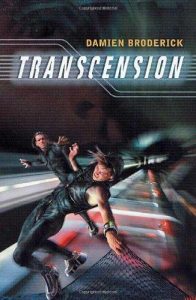 Had I read it when it was released, I’d probably now be classifying Transcension (2002) by Damien Broderick as “proto-Futurismic SF;” its approach and attitude would have contributed nicely to the then-nascent vision I had for our website’s fiction section. Even now it holds up well as a solid work of speculative SF, although its edge may have been dulled a bit by later SF it may well have inspired. The future on display here, though, is still a detailed and interesting one. I found aspects of the novel difficult, but on the whole I found it a worthwhile, thought-provoking read.

The surface plot follows the intertwined trajectories of three main characters: Amanda Kolby-McAllister, a bright musician and daredevil nearing the end of an artificially extended adolescence; Matthewmark Fisher, a simple but good-hearted young man living a sequestered life in a Luddite religious colony; and Dr. Karim Abdel-Malik, a brilliant scientist whose work has directly resulted in the birth of a god-like artificial intelligence. Their stories run individually and frequently intersect, but the surface  details of their stories seem a bit incidental to the Big Idea running beneath the surface: the concept of the singularity, here an imminent, universe-transforming event brought about by exponentially accelerating technological change.

The book paints a fascinating picture of a fractured, unsettlingly clinical future world, ruled by systems and technology and magistrates, and the main thrust of its narrative — involving a reckless stunt Amanda undertakes, which leads her to infiltrate Matthewmark’s religious colony — clips along engagingly, although the pace is hindered slightly by the clipped, stilted “pender” slang Amanda uses, which never feels entirely natural.

In the end, a couple of distracting issues kept me from enjoying the book whole-heartedly. One was a general wood-for-trees problem: like many singularity-centered novels, there is plenty of speculation and detail vying for your attention, which for all its richness sometimes unfocuses the narrative. The individual character arcs, at times, overshadow the novel’s more intriguing world-building and concepts, and occasionally they don’t feel all that connected to them. The rapidly approaching “Spike” (singularity), such a major focus of the book’s latter stages, seems a little too under-the-surface.

The other issue is the novel’s somewhat one-dimensional depiction of religion, as depicted through Matthewmark’s isolated enclave, the Valley of the God of One’s Choice. As someone firmly in the secular/scientific mindset, even I had a difficult time buying into the rustic, backwards culture of the Valley, more a product of the past than the future, and its largely ignorant people. It’s a bit too crassly unsympathetic to the issue, I think to the novel’s detriment.

Reservations aside, there’s still a lot to like in the novel, its detailed future world and thoughtfully extrapolated speculative concepts, and impressive Big Ideas. Although I had some problems with it, I think it’s definitely a worthy entry in the subgenre of singularity-inspired SF.