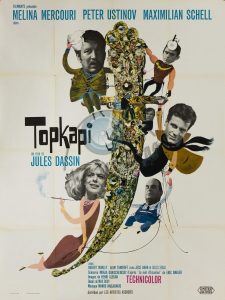 This weekend I caught up withTopkapi (1964) on DVR. Based on an Eric Ambler novel, the film is a heist movie about a group of international criminals who plot the theft of an emerald-encrusted dagger from a museum in Istanbul. Motivated by an avaricious bombshell (the engagingly odd Melina Mercouri) and steered by a slick mastermind (Maximilian Schell, perfectly cast), the team sees their meticulous plan morph into something else entirely, thanks largely to the comical involvement of a low-rent con man roped into the situation (Peter Ustinov, in a brilliantly funny, Academy Award-winning performance).

I saw Topkapi years ago and remember liking it a lot at the time, particularly for its elaborate heist sequence, its intricate visual story-telling, and its unique international feel and look. The film was a major inspiration for the original Mission: Impossible (indeed, the first two episodes of Mission borrow liberally from Topkapi), and there are certainly obvious parallels — the team has a planning mastermind, a sultry actress, a strong man, and an engineering genius, archetypes clearly lifted by Bruce Geller for his iconic TV spy series.

I’d forgotten, however, what a delightfully weird movie Topkapi is, like a bastard cousin of early James Bond mutated by trippy sixties sensibilities, with fourth-wall violations and thick accents, technicolor visuals and unexpected plot turns, a sweeping international scope and a unique sense of humor. The characters here are not the humorless automatons of Mission: Impossible:  Ustinov is a joy to watch as the hapless, bumbling Arthur Simpson; Mercouri is at once electric and creepy as the unapologetic nymphomaniac, Elizabeth Lipp; Robert Morley, as the quirky British egghead Cedric Page, is an amusing and unlikely criminal. The interactions of this not-very-Hollywood cast of characters are clever, riveting, and at times hilarious.

It’s a wonderful clash of comedy and intrigue, perhaps slow at times (by modern standards), but ultimately one of those one-of-a-kind movies worth going out of your way to see.