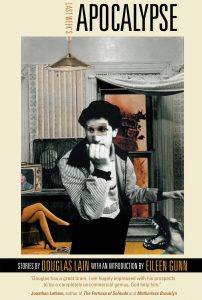 Douglas Lain started publishing regularly right around the time I started reviewing for Tangent, and I remember his stories clicking with me right out of the gates. His first collection, Last Week’s Apocalypse (2006) — is that a great title, or what? — is probably not for everyone’s tastes, but I found it a pretty remarkable book, its stories consistently funny, unsettling, inventive, and full of surprises. I’m not sure I always got the stories, but it never seemed to matter, and ultimately I wasn’t always convinced they were supposed to be gotten. They evoke and provoke, regardless. The prose is effortlessly read, often laugh-at-loud funny, with a singularly quirky tone. Even when the trees obscured the forest, I found myself simply enjoying the trees — the recurring themes and ideas, which include frequent musings on war, drug use, the nature of reality, mental illness, pop culture, marketing, politics, and consumerism, to name a few.

Lain’s most consistent mode straddles the line between a kind of Twilight Zone-ish soft SF and slippery, interstitial contemporary fantasy. Some standouts for me, in this vein, were “The ’84 Regress,” in which a present-day couple goes off its meds, only to find that the drugs had been projecting them into the future from a perfectly recaptured 1984; “The Headline Trick,” a highly pessimistic but darkly comic tale of a man who’s developed a mundanely magical way of gaming the system, only to find he may be contributing to its downfall; and “Shopping at the Edge of the World,” about a magical shredder that seems to only work on advertising copy, but turns out to be more powerful than expected. The latter two in particular are masterfully done literalized metaphor stories, funny and bleak.  Indeed, even the more traditional-looking SF — such as “How to Stop Selling Jesus” (a less-than-devout salesman peddles holographic Jesus apps door-to-door) and “Identity is a Construct” (simulated humans journey to Alpha Centauri on a diplomatic mission) are less interested in their superficial skiffy trappings than in their thoughtful, internal subtexts about identity, belief, parenthood, reality, language, and more.

Even the collection’s less immediately successful outings are worthy and interesting. The short, sharp “On a Scale of One to Three,” for example, is perhaps too didactic, but no less chilling for it. The ballsy, metafictional “The Suburbs of the Citadel of Thought” is a somewhat scattered , self-aware story that’s perhaps a bit indulgent, but bravely so, and “I Read the News Today,” which is similarly disjointed, manages to cohere in a dark, disturbingly funny way.

A very thought-provoking collection. Taken collectively, the stories have a real undercurrent of melancholy and even anger to them, but individually they’re breezy and quirky and amusing. I kind of like work that pulls me in different directions like that, so Last Week’s Apocalypse really pushed my buttons.

Oh, and by the way: if this review interests you in Lain’s work at all, I encourage you to click over to his wonderful story “Resurfacing Billy,” which Paul and I had the pleasure of publishing at Futurismic last year. This story had the poor luck of going up on election day and was simply buried in political news: an unjust fate for a great story.