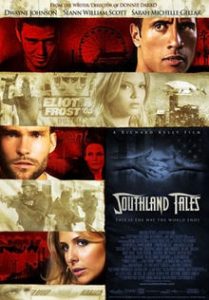 It’s looking like the original, theatrical edit of Donnie Darko was a happy fluke for writer-director Richard Kelly. I found that film unique and riveting, and enjoyed it so much that I bought the extended director’s cut — which, as it turned out, felt like an entirely different, and considerably worse, film, which over-explained and/or stepped on the original cut’s every intrigue.

And now there’s Kelly’s follow-up film, Southland Tales (2006), which I attempted to watch yesterday morning (and yes, “attempted” is the operative word). A mish-mash of near-futurish SF concepts, the film is purportedly an unsettling look at a post-9/11 dystopian political quagmire, but aside from an effectively chilling opening scene, the movie quickly devolves into an incoherent mess. The story is disjointed, the pacing sluggish, the atmosphere an incompetent faux-Lynchian attempt at disquiet that is mostly just painfully dull. The film is shamelessly stunt-cast with familiar film and TV icons from the past twenty years, none of whom are able to breathe any life into the proceedings.

This is a profoundly awful film, and worse, it’s not even interestingly awful. I was bored after fifteen minutes, and gave up completely after forty. I heard it was bad, but I thought at least it would be interesting. It’s not — view at your peril.