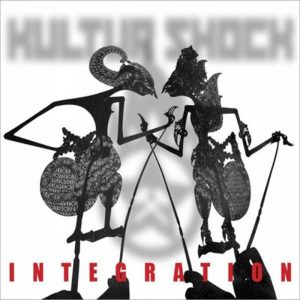 My latest new music purchase: Integration (2009), the fourth studio album by Seattle-based band Kultur Shock. I have a thing for bands that mash disparate influences into something unique, and Kultur Shock totally fits that bill, blending a number of styles and genres in their music. Its band members range from Bosnia, Bulgaria, Indonesia, and the United States, and it draws liberally from all its many cultural backgrounds, plus. The best nutshell description I saw categorizes their music as “Balkan punk rock gypsy metal.” But really it’s more than that…every track in their library has the capacity to surprise.

Integration is a solid addition to the Kultur Shock discography, although it didn’t quite blow me away the way a couple of its earlier albums did. I was put off a bit by tracks that contain some hillbilly, country-sounding licks, like “King” and “Country Mohammad,” and the slow-moving “Rose” just isn’t my cup of tea. But for the most part the album connected with me, thanks to the intricate rhythms and complicated melodies of “Balchannalia” (pick of the album, for me), driving, powerful tunes like “Guerilla,” “Holy Day,” and “Words,” and the epic prog-punk of “Gore Gore.”

It’s probably not for everybody — hell, just about every music review I write could include that disclaimer! — but if it sounds interesting, sample a few tracks. Integration might be a good gateway album leading back to  their early stuff.