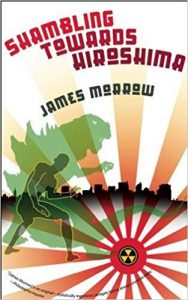 The previous two novels from James Morrow, The Last Witchfinder and The Philosopher’s Apprentice, are both highly intelligent and challenging books, wonderfully detailed and funny, and bursting with the author’s boundless enthusiasm for his material. In both cases, that material is at the academic and intellectual end of the spectrum — at times, I felt like some of the jokes would have benefited from an advanced degree in history or philosophy — but for me, the unusual territory was a integral to the fun. Morrow’s work is ever thought-provoking, and I’ll gladly stretch out of my comfort zone to see what he has to say.

Morrow’s latest release — a short novel entitled Shambling Towards Hiroshima (2009) — feels like a relaxing, breezy read by comparison. The subject matter is no less esoteric, and just as thematically serious, but the milieu is somewhat more welcoming to the casual reader. It’s the story of Syms K. Thorley, a noted creature-feature actor of Hollywood’s Golden Age, and his participation in a military project to bring an early end to the war against Japan in 1945. Told in flashback from Thorley’s seedy Baltimore hotel on the night he’s received a lifetime achievement award from a science fiction convention, it tells the tale of his recruitment into a U.S. Navy biological weapons project to…well, to unleash giant lizards against the Japanese mainland, in order to head off a more conventional invasion and its requisite military casualties. This initiative, a covert rival of the Manhattan Project, quickly turns into a collaboration between the Navy and Hollywood, resulting in a compelling, amusingly absurd, and powerful tale.

At a brisk 170 pages, Shambling Towards Hiroshima is tightly constructed, and engagingly recaptures the L.A. of the 1940s from the Hollywood Hills to the inland deserts.  Since this is a secret history rather than an alternate one, the ending is never really in doubt, of course: we all know which war-ending military project wins the race. But Morrow’s witty narrative succeeds despite the inherent spoiler, making the ride enjoyable enough that the somewhat predictable result is not a detriment. He also absolutely nails the required absurdist tone to make his Godzilla plot work, so that the book is at once a lovingly crafted homage to the low budget sci-fi films of a bygone era, and a serious and elegiac look back at the unfortunate path of actual history. Morrow masterfully brings all the loopy, comical build-up to a surprisingly sobering and powerful conclusion. So, shock of shocks: Morrow has done it again!