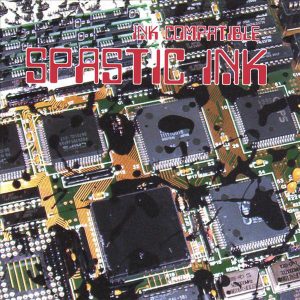 I needed some new, intricate prog-metal to listen to while waiting for the next Blotted Science album to come out (if there is one…I don’t exactly have my finger on the pulse, here). So I reached back to guitarist Ron Jarzombek’s previous band, Spastic Ink.  Featuring Jarzombek on guitar, brother Bobby Jarzombek on drums, and Pete Perez on bass, plus a boatload of guest musicians, Spastic Ink possesses a lot of Blotted Science’s strengths, plus some weaknesses, mostly in the vocal arena.

The opening track on Ink Compatible conveniently illustrates the majority of Spastic Ink’s pros and cons all in one eight-minute song.  “Aquanet” features virtuoso-level playing from its three principals, fearless and unpredictable meter changes, and more notes per second than most bands can fit into eight measures. But it also features vocals. Sigh. The vocalizing, at its best, adds some interesting harmonies, and generally they aren’t that bad  lyrically (to the extent that I pay attention to this sort of thing). But often it feels too shrieky and “Is that Guitar Rock? Well turn it up, man!” This flaw persists throughout the album, as does the band’s tendency to interject their compositions with “comedic” monologues — in this track  represented by an annoyed operator during the outro, but later represented by hicks struggling to understand their computers (“Words for Nerds” and “Melissa’s Friend”), or a woman reciting a litany of cliches (“A Chaotic Realization of Nothing Yet Understood”). In this last case, the words are particularly distracting in an otherwise pretty epic composition. It’s not unlike the spoken word silliness often exhibited on certain Buckethead albums — it must be some kind of shredder-guitarist sensibility — but it’s usually funnier in Buckethead’s case. Anyway, it’s easy to see why the verbalizing and vocalizing was jettisoned for Blotted Science: it all just distracts some really impressive musicianship.

All of the mentioned tracks feature incredible playing in spades, and while it’s easiest to single out the, well, spastic guitar work and the incredibly intricate drumming, don’t forget the bassist — just when you think you haven’t noticed him in a while, he’ll bust into an insane solo to remind you he can play. The tightly constructed “Read Me” felt the most like the Blotted Science to come, while “A Chaotic Realization of Nothing Yet Understood” definitely stands out for its scope and complexity. Even the more balladic “Multi-Masking,” one of the more conventional numbers, features some great bass-drum interplay during the jam session.

Ultimately on the whole I prefer Blotted Science, but Ink Compatible grew on me after awhile, and it still rewards repeat listening. Definitely worth a look for fans of complex metal with a lot of notes.