Novel: The Drylands by Mary Rosenblum 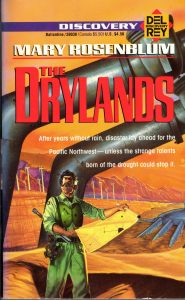 The Drylands (1993) by Mary Rosenblum is an impressively prescient novel centered around imminent worldwide water shortage. In the author’s foreward to her collection Water Rites (in which The Drylands is reprinted in full, along with three related stories), Rosenblum notes that the global warming research she did in the early nineties for this series projected the world’s water problems would really hit home forty years into the future, but that reality has already started to outrace those predictions. If you’re looking for escapist SF, head elsewhere; The Drylands is effective cautionary SF that is even more topical now than when it was originally published.

Set in Oregon in the near-future, The Drylands posits a world in which severe water shortages have led to a general breakdown of society. The peace is kept, barely, by the Corps — a transformed and more powerful Army Corps of Engineers, in this scenario — whose job it is to protect the enormous water pipelines that feed from Canada down into the U.S. and Mexico. The larger issue is illustrated on the local level, in a political clash between the Corps and the locals — represented by two main protagonists. Colonel Carter Voltaire, a Corps officer recently transferred after a previous command went wrong in Chicago, is a man in the middle, attempting to accommodate the needs and demands of his superiors, the powerful Water Policy officials who control water distirbution, and the desperate local elements. Meanwhile Nita Montoya, a new mother with a strange empathic ability, becomes entangled in the local politics, witnessing events unfold on the ground. The two of them become central figures in the struggle to keep the peace between opposing forces that seem hellbent on starting a war over the flow of water.

It’s a grim, dystopian vision to be sure, and all too plausible; the passage of time has not at all blunted its cautionary edge. The plot starts slowly, but escalates nicely in its second half as the protagonists unravel a series of mysteries to get to the truth at the political realities underlying their situation. I wasn’t all that enamored of the need for mutation-related super powers in some of its characters, such as Nita’s empath abilities; to me this it seemed an incongruous fantastical element in an otherwise heavily realistic speculation. But overall I found it an enjoyable, message-driven novel, and I’ll definitely be seeking more of the author’s work.