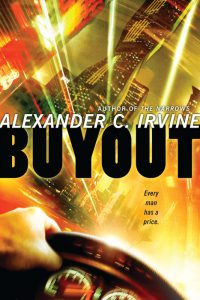 If Buyout (2009) by Alexander C. Irvine isn’t the best science fiction novel I’ve read this year, it’s certainly my favorite. You might even make that the past several years. Irvine, a versatile talent who thrives in multiple genres, sets his sights on near future Los Angeles in this one, and he hits the bullseye squarely, turning out both a gripping cinematic thriller and an impressive work of detailed near-future speculation. Confronting a multitude of the world’s imminent problems and concerns, Buyout is hard-hitting, topical science fiction, and I think one of the most important SF novels to come out in years.

Buyout follows the journey of one Martin Kindred, an idealistic numbers man working an undistinguished career in the insurance industry, whose prospects take an unexpected turn when his firm is bought out. The new owners are in the prison business, and the company bigwigs are pushing a radical new initiative: the buyout program, a system whereby life-term inmates can “buy out” their sentences by allowing themselves to be put to death.  In return, the inmates will receive financial settlments based on a percentage of the money presumably “saved” by their deaths. The money can be distributed however the inmate wishes. It’s a win-win for everyone, or so it seems:  prison populations are lowered, the company becomes more liquid, and — best of all — the life-termers are able to make amends by turning their crimes into good: providing for their victims, affected family members, charities, or organizations of their choice. Martin’s new bosses want him to be the figurehead of the program, knowing his basic decency and idealism will get the controversial new program off on the right foot. And at first it appears that way, as Martin’s efforts help to legitimize buyouts and also make him a minor public figure. But soon enough, unexpected events mire him in a web of intrigue, and he’s forced to come to terms with the fallout of his actions.

On the story level, the novel is just a cracking good read, moving along briskly from page one. It’s populated with believable, well developed characters moving through a convincingly rendered future California. Although marketed as a thriller, it’s really not conventionally structured as such; whereas thrillers are generally about maintaining or restoring a comfortable status quo, Buyout is decidedly about change, in particular the gradual, inexorable change of the sociopolitical landscape of the United States. Even so, it certainly possesses thriller-like components sure to please fans of the genre — villains both individual and organizational, mysteries and conspiracies, clashing motives and ideals, cops and crooks and a protagonist caught in the middle of it all. Adapted shrewdly, it would make a killer movie.

But that’s just considering story, and there’s also the science fictional level, which elevates the novel even further. Irvine’s near future feels just as messy and complicated and unpredictable as our present, but adds a layer of well crafted and realistic SFnal modding. From its surveillance society to its smart traffic, its augmented and virtual realities, its Hollywood avatars and hologram computer servants, its ubiquitous networking and “Wi-Free” subcultures, Buyout is rife with compelling future-building, all painted against a convincingly progressed backdrop reflecting potential shifts in politics, culture, sociology, climate, and more. The book’s SFnal side is enhanced immeasurably by chapter-break interludes featuring the voice of an anonymous audio-blogger, Walt Dangerfield, whose rants inform both the surface story and the larger world of the book. These sections provide some of the novel’s most eloquent and powerful moments.

Irvine covers a lot of angles in this one, and the inherent philosophical arguments of this changed world — and of the buyout program in particular — are well considered and even-handedly presented. The inner struggles of the characters, in the face of the world’s daunting challenges, lead to a number of beautifully written, insightful moments.

Buyout may not be the book for you, if you’re looking for answers and a neat-and-tidy resolution. But if you’re interested in a gripping SF novel that confronts challenging questions about the world we’re making and an individual’s place in it, I can’t recommend this novel highly enough.

Film: Nothing But the Truth