It was kind of a long, rough week, so Saturday came as a welcome respite, and Jenn and I spent a busy and celebratory day together.

First we went to Jenn’s studio in Burbank for a screening party of the new Slangman’s World episodes. For those who aren’t aware, Jenn has been writing and voice-acting for this animated kids’ show, the next incarnation of which is debuting on Georgia Public Broadcasting tomorrow. The new shows are a blast and it’s an exciting time for the studio as they anticipate further production.

Then we drove south to the Staples Center in downtown LA to watch the home opener for the Los Angeles Kings. We’ve never had so much fun watching our team get destroyed. The visiting Phoenix Coyotes, a team in financial disarray and with its ultimate future still in limbo, shredded our defense to win 6-3. Decked out in our home blacks, we had fun anyway, and both of our jersey picks — Alexander Frolov and Anze Kopitar — scored goals, leading us to conclude that had we just worn four more jerseys, we might have pulled this one out! Better luck next time, fellas.

In the aftermath of this busy and exhausting day, we stayed holed up at home on Sunday writing, drinking coffee, napping, watching TV, and generally chilling with the cats. I also joined my first-ever World of Warcraft PuG raid, an overpowered Molten Core run this morning. I usually hate pick-up groups but for some reason I got talked into this one, and had fun. I also came out of it with this awesome screenshot of my orc taking aim at the final boss: 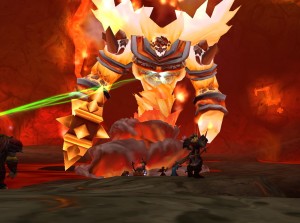 Overall a great weekend, and it couldn’t have come at a better time. Life should always be all weekend-y!

Novel: At Risk by Stella Rimington