Music: The Incomplete Recordings 1981-1988 by The Pressure Boys 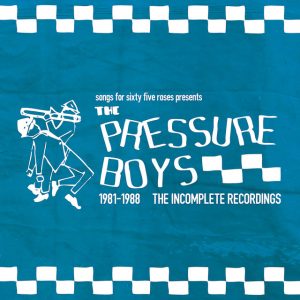 It may be a bit of a stretch to say the Pressure Boys were ahead of their time; as kind of a mutant mash-up of British ska, horn-heavy funk, hillbilly punk, and reggae, there’s plenty of eighties era precedence for their type of stuff (Fishbone and Oingo Boingo leap to mind). Even so, these guys seem like the kind of obscure, niche group tailor-made for fringe creative survival during the internet era — not the old school workings of the music industry of their time.

Appropriate, then, that they should rematerialize on iTunes after years of being painfully out-of-print, and I couldn’t have been more jazzed when I found out. The Incomplete Recordings: 1981-1988, released last April, finally replaces my lost, lamented, and horribly recorded cassettes of obscure-label vinyl I made at the college radio station back in Fredonia (which had been rife with skips, bad levels, and oops-I-pressed-record moments).

The only thing wrong with this 18-track collection is that, well, yeah, it is incomplete…at the end of the day, I’m still craving a fully remastered copy of their 1987 album Krandlebanum Monumentus, which is the one I played into the ground back in my learning-to-play-bass-by-ear days. Indeed, this new release contains a number of tunes from that album, but out of order and with some exceptions (such as “A Chew and a Swallow” and the E-funk bass riffing that is “Lava Booger”). Still, having clean copies of great tunes like “Around the World,” “Dial-Tone,”  “Terrible Brain,” and especially “Off to Lake Tumont” — all of which mash raw guitars, groovy beats, and tight horn arrangements to unique effect — is pretty priceless nostalgia for me.

The earlier selections tend to have more of a traditional ska feel, hardly unwelcome, but in the wake of my extensive over-listening to nineties ska a few years back, doesn’t strike me as quite as interesting. Even so, I’m happy to “discover” some never-heard-before stuff like the unabashed funkiness of “Soul Chip” and the Madness-like groove of “Policeman in My Neighbor’s Yard.” But generally, the Krandblebanum cuts are still the score of this re-release: all the celebratory feel of ska, but with infectious backbeats and gutsy dissonance setting it apart.

These guys may not seem all that special to people steeped in the easier-to-find postmodern genre-fusion of the past twenty years, but back in 1988, while trying to escape the cheesy synthetic dance beats and insincere hair metal of those bleak days, the Pressure Boys were a godsend, and it’s nice to see some of their material find new life.

Novel: At Risk by Stella Rimington

The Riches and Other Criminal Families