The Riches and Other Criminal Families 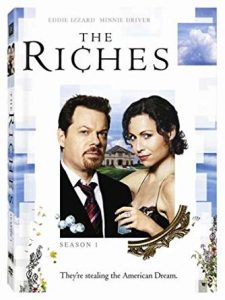 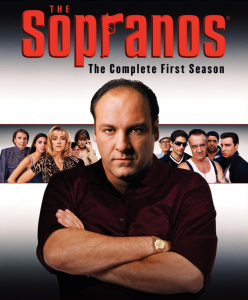 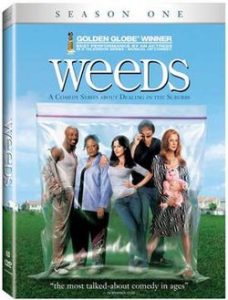 The Riches (2007-2008) has everything I like in a good TV show: a strong premise, effective writing, terrific acting, realistic language, edgy themes, and the odd surprise along the way. Even so, as I reached  the end of the first season DVD set — which took an uncharacteristically long time for me to get through — I’m just not feeling hooked. And while I wouldn’t rule out following up with the show’s second and final season, I’m just not feeling at all compelled to do so.

The show follows the Malloys, a nuclear family of five off-the-grid travelers, scraping by on con games, graft, and petty crimes. Early in the season, the Malloys run afoul of the greater community of travelers, steal some money from them, and make a break for it. But their escape attempt leads to a  violent car chase, which unexpectedly takes the lives of lawyer Doug Rich and his wife, who are on their way to start a new life in Eden Falls, Louisiana. The not-insignificantly-named Eden Falls is an opulent, plastic cookie-cutter community, where the Riches have just purchased a brand new McMansion. Although most of the family is appalled at what’s happened, opportunistic father Wayne (Eddie Izzard) can’t pass up what is soon to become the family’s biggest scam: impersonating the Riches and living the lives of actual, law-abiding, capitalist Americans (or “buffers,” in their parlance).

So why do I feel like I don’t like the show all that much? I’ve been trying to put my finger on it, and at first I thought it might be that it felt somewhat thematically derivative of other shows — in particular, The Sopranos and Weeds. The three shows are tonally different, but cover a lot of the same ground. Each suggests that the entitled American family is inherently leading a criminal way of life merely by participating in the capitalist system, selfish and greedy and callous in its very essence. I’m tempted to label it a reactionary trend against the me-first Republican regime under which these shows were developed; but that would probably be reading into it too much.

The Sopranos, of course, paved the way in this area, borrowing liberally from traditional crime family/mafia tropes, but then brilliantly layering that milieu over suburban American life and forcing its characters — and, by extension, its viewers — to confront their selfishness in the name of satisfying entitled lifestyle choices. Not without humor, The Sopranos’ chief strength was its dramatic tension, as its appalling anti-heroes went to greater and greater lengths to justify their brutal, selfish activities. Is a murderous thug like Paulie, ready to kill for his piece of the pie, that much worse than the outwardly reasonable Carmela, willing to turn a blind eye to atrocities she’s tacitly a party to? The Sopranos fascinates with these moral conundrums, challenging the viewer to question why they’re rooting for anybody.

If The Sopranos punctuates its dark, dramatic focus with moments of unexpected comedy, Weeds takes the reverse approach, maintaining a zany, witty surface while darker materials lurk below. But Weeds is treading the same thematic ground, successful in its own, entirely different right. In some ways, the behavior of Nancy Botwin (Mary-Louise Parker) and her family in Weeds may even be more appalling, because their milieu doesn’t have the heightened reality of epic mafia tropes enabling the viewer to hold it at an arm’s distance. The Botwins are the essence of entitled American money-grubbing, refusing to play by the rules that impact their comfort — regardless of the consequences.

Enter The Riches, then, which plies similar territory, but doesn’t quite succeed at the same level. I think, perhaps, the main problem is that The Riches doesn’t really nail its tone. It’s often too serious to sell its comic shenanigans, or too wacky to convince us to take it seriously, and it’s not always easy to tell which way the show wants us to lean. This tonal dichotomy is embodied in Izzard’s character, whose credibility hinges on the extremes of the weekly plot — the more ridiculous the scheme, the better he comes off, the more serious, the worse. I both like and dislike Izzard in this role, depending on the scene.

Another issue is that The Riches critiques from outside, while The Sopranos and Weeds critique from within. To me, the latter two succeed largely by inviting the viewer to see themselves in the shows’ anti-heroes; contrarily, the anti-heroes of The Riches never really buy into the system from which they’re benefiting, so it always feels a little like they’re talking down to the audience. It’s a different approach to the thematic issues, and not invalid, but for me it just doesn’t come off as artfully.

Still, I frequently find The Riches interesting and worthwhile viewing — a late-season arc involving guest actor Arye Gross is particularly hard-hitting stuff — and if I can’t recommend it whole-heartedly, I’d surely recommend it with reservations. It’s a peculiar product, and that’s always worth something in my book.

Music: The Incomplete Recordings 1981-1988 by The Pressure Boys