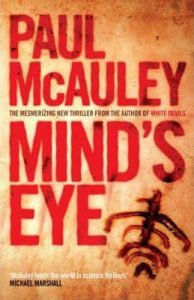 I enjoyed a pair of Paul McAuley‘s near-futurish thrillers from earlier in the decade, Whole Wide World and White Devils, so I was looking forward to his next, Mind’s Eye (2005), which ended up never getting a US edition. I finally tracked down a copy, and found it to be similarly satisfying, although I didn’t outright love it.

Not entirely science fictional, the premise of Mind’s Eye is nonetheless genresque and fantastical. Unknown to most, there exist in the world ancient glyphs that, when viewed, have potent mind-altering effects on those who observe them. The story focuses on two people in London who take an interest in these glyphs when they begin popping up around the city in the form of anti-war graffiti. Harriet Crowley is a freelance spook, and the descendant of a secret society dedicated to keeping these dangerous glyphs hidden from the world so that they aren’t misused. Alfie Flowers, a more unwitting descendent of this group, is a freelance photographer whose childhood run-in with the glyphs has  rendered him particularly susceptible to their effects. Alfie and his erstwhile friend Toby, a wise-cracking, chain-smoking journalist, attempt to track down the source of the graffiti in the hopes of curing Alfie of the life-shaping seizures that have plagued him since the childhood incident. Meanwhile, Harriet works behind the scenes trying to prevent the glyphs from falling into the hands of some decidedly villainous interests. Their paths intersect when what begins as a search for an artist gradually grows more perilous, the protagonists crossing paths with interests attempting to seize the glyphs’ power.

The plotting is quite well done, and McAuley’s prose is clear and engaging throughout, although at times it shifts gears awkwardly. Particularly in the first book, set in London, the narrative lurches into flashback without warning on occasion, and at times the writing is a bit distancing. But things speed up nicely later when the adventure takes the book’s heroes to the Middle East, and events ultimately accelerate to an exciting climax.

With its mix of politics, current events, mysterious secret history and gritty action, Mind’s Eye struck me as a very cinematic reading experience, conjuring early John Frankenheimer movies like Seconds and The Manchurian Candidate, which had similarly unsetlling  quasi-SF overtones. Perhaps it was the politics, though, that kept it off U.S. shelves? In spite of its fantastical MacGuffin, it definitely riffs off controversial real-world situations (in particular the war in Iraq, and American and British involvement there) which might have been a tough sell here in the Bush era. I mention this as an observation, rather than a criticism; I found the politics integral, and not that intrusive. That the villains were pursuing American interests didn’t bother me either, as they were fairly cartoonish villains with a tendency to infodump and monologue at times — another issue entirely, and one of the novel’s more noticeable flaws in my opinion. Ultimately, though, I found Mind’s Eye well worth the read, an intriguing thriller that, in the right hands, would probably make a pretty good movie.

Collection: Nano Comes to Clifford Falls and Other Stories by Nancy Kress