Collection: Nano Comes to Clifford Falls and Other Stories by Nancy Kress 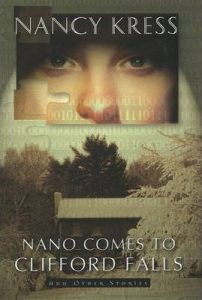 One of the publishers-of-choice for high-quality genre fiction collections has got to be Golden Gryphon, and Nano Comes to Clifford Falls and Other Stories (2008) by Nancy Kress continues that tradition nicely, collecting thirteen of the author’s stories from the 2000s.

By and large it’s a strong collection of mostly hard SF, focusing equally well on the immediate personal interests of its characters and the wider, larger concerns of its Big Ideas. I tend to prefer Kress (as, let’s face it, I tend to prefer most SF) closer to home, so perhaps unsurprisingly the highlights for me were its near-future tales — in particular, “Wetlands Reserve,” which regards a scientist’s investigation of a startling find in an upstate NY wilderness preserve, and “Computer Virus,” which contains some intriguing speculation on artificial intelligence. Both these stories trend in the cautionary direction, and indeed that seems to be fairly common throughout the volume, from the amusing short-shorts “Patent Infringement” and “Product Development,” to the title story, “Nano Comes to Clifford Falls,” which involves the arrival of a powerful new technology at a small community that’s rather reluctant to embrace it. Although interested by the subject matter, I found this particular story kind of flat and muddled, an odd choice to headline the collection. (But if the author’s note is any indication, this one spawned a number of conflicting reactions, so clearly your mileage may vary here.)

The deep-future, space-based, Big Idea SF on display here isn’t without merit either, of course. Particularly effective for me was “Ej-Es,” which involves an intergalactic Peace Corps and their investigation of an odd colony world struck with a strange, mass hallucination virus; this one pulls off a neat trick in its final moments that really sells its theme. The deep, deep future of “Mirror Image” presents some of the collection’s most inventive and ambitious world-building (really I should say “universe-building”), and while I found this one perhaps a bit overlong, I was terrifically impressed by the breadth and detail of its setting and the scope of its ideas. Alas, the only major “miss” of the collection for me also fell into this category — the predictable, retro space fiction “First Flight,” which celebrates old school, 1950s SF TV. (Clearly I’m not the target audience for this one.) Overall, there’s plenty of strong work on display here to recommend the collection.