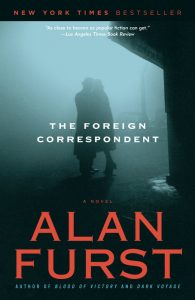 Since discovering the work of Alan Furst, I’ve been rationing his novels in order to make sure I always have a new one in my back pocket for special occasions. Last week, I indulged by grabbing The Foreign Correspondent (2006) off my reading pile, and blazed through it in about three or four reading sessions. Damn, only one left now!

Set in the late thirties in the anxious months leading up to World War II, The Foreign Correspondent features, as most of Furst’s historical spy novels do, a reluctant European hero caught in the middle of clashing political ideologies. In this case it’s Carlo Weisz, an Italian citizen from a disputed-border area near Slovenia and Austria, who fled Mussolini’s fascist regime to resettle in Paris — as ever, a major character in this author’s work. A journalist for Reuters, Weisz moonlights for an émigré resistance newspaper called Liberazione, writing anti-fascist copy which is smuggled into Italy as an alternative news source, thumbing its nose at fascism. Unfortunately for Weisz, the Italian secret police has gotten wind of Liberazione and targeted its staff for murder and harrassment, which thrusts Weisz squarely into the crosshairs of multiple intelligence organizations. Complicating matters, Weisz’ brief assignment to cover Berlin rekindles a love affair with an old flame, Christa von Schirren, now married to a German military officer and embroiled in her own dangerous resistance activities. As a border-crossing polyglot, Weisz is perfectly situated to help her, and a combination of conscience, circumstance, and opportunity compel him to risk everything to fight the burgeoning might of the Axis powers.

As noted in my review of Kingdom of Shadows, my only real complaint about Furst’s work is that it tends to over-rely on familiar elements that recur from book to book. But when it comes down to it, while formula it may be, it’s a formula I really, really like, and Furst executes it here pretty much to perfection. Indeed, on completion I pegged it immediately as his best book since Dark Star. It lacks that novel’s length and scope, perhaps, but I think part of its success is that it’s one of his most tightly focused books, boiled down to a more manageable cast of characters and plot elements, so that the pace feels a bit brisker than normal. Even so, it displays the traditional broad canvas of continent-spanning adventures, centered on Paris intrigue but also featuring tense sequences in Spain, Germany, Czechoslovakia, and Italy, and as usual the protagonist — and I should note that Weisz makes a particularly likable one — moves through a convincingly rendered pre-war Europe filled with interesting historical detail.

When it comes down to it, you just can’t do much better than Furst when it comes to engaging combinations of intrigue, adventure, romance, and history. The Foreign Correspondent is a superb addition to his body of work, and I have half a mind to race out and grab The Spies of Warsaw, because it occurs to me that maybe my hoarding strategy is flawed; I’m bound to read this all again eventually, so why not get to it?

A Brief Fiction Hiatus at Futurismic