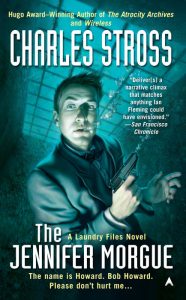 When I read The Atrocity Archives a few years ago, it instantly became my favorite Charles Stross novel to-date*, an inventive and clever conflation of occult horror and espionage. I was looking forward to its sequel, The Jennifer Morgue, which continues the saga of reluctant techie-espiocrat Bob Howard, who this time finds himself dragged into adventurous field work in the Caribbean, where a deranged industrialist is threatening to unleash a powerful, otherworldly weapon from the depths of the ocean. Can Howard, paired (in the most intrusive way imaginable) with a beautiful, inhuman assassin, thwart the plot?

Alas, I found myself not terribly interested in the answer to that question. I usually love Stross’ work, but oddly The Jennifer Morgue didn’t do much for me. Although, as usual, it possesses Stross’ distinctive voice and impressively casual creativity, for some reason the book missed the mark for me. The author’s confident rants and diversions felt more distracting than compelling, and I suspect the recursive James Bond story structure rubbed me the wrong way (I’ve never been a big 007 fan). It could well be that I’ve read so many spy novels since The Atrocity Archives that my sensibilities in this area have changed, and a concept that originally struck me as a successful fusion of two genres, here just seemed like a novel with a split focus, half-successful with each element.

For all this negativity, I suspect that for most regular Stross readers, The Jennifer Morgue will deliver the desired reading experience. For whatever reason, though, I found this one unengaging.

* It’s since been supplanted in my memory by the impressive far future SF novel Glasshouse.