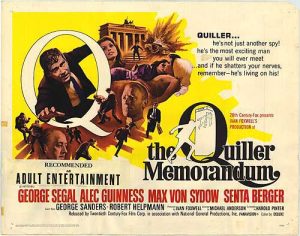 For being so low on the list, The Quiller Memorandum (1966) turned out to be much better than I was expecting, a colorful, picturesque puzzler that may be, if there is such a thing, the quintessential anti-neo-Nazi spy film.

The set-up is fairly simple: MI6 is attempting to sniff out a secret Nazi underground in West Berlin. Their first two operations, however, have met with utter failure — and two dead agents. Enter Quiller (George Segal), a daring, somewhat reckless American agent, who is recruited by arms-length controller Pol (the gloriously unctuous Alec Guiness) to follow in the footsteps of dead men. Quiller accepts the case, and with little more than a handful of clues, sets out to locate the Nazis’ secret lair. His risky strategy involves rattling around town asking loud questions — and it pays off, landing him in the clutches of the ruthless Nazi ringleader, Oktober (played, but of course, by Max von Sydow). It turns out Oktober is just as anxious to locate his British opponents as they are to find him, though, and Quiller soon finds himself caught in the middle, a pawn in a Cold War chess match. Quiller needs to pinpoint the Nazi headquarters without betraying his allies, all the while keeping himself and his on-the-fly German girlfriend, schoolteacher Inga (Senta Berger), from getting caught in the crossfire.

The opening situation isn’t all that complicated, but the ultimate plot is well structured, providing the requisite twists and turns. The story is helped in no small part by effective dialogue from Harold Pinter; highlights include droll exchanges between Segal and Guiness, and a particularly good interrogation scene. (And trust me, I’ve seen a lot of bad interrogation scenes, so this one — with von Sydow cleverly ribbing Segal, who is desperately resisting a mind-warping truth serum — jumped out at me.) A simple but effective framing device ties it all together, and the cynical denouement provides a creepy, powerful final note. The film has a distinct and striking look, kind of a mix of noir and Technicolor, much of it shot on location in West Berlin, which lends an air of authenticity to what could easily have come off as a comic book plot. The pace is at times stately and thoughtful, with long passages of silence and minimal dialogue; I suspect it might bore some viewers, but I found it nicely suited to the material and generally engaging.

Clearly I don’t have much to complain about with this one, but it’s not without a few flaws. There are a couple of odd, slightly amusing scenes involving British espiocrats in London, which seemed wedged in to emphasize the cold-hearted divide between the brass who pull the strings and the soldiers of the Cold War battleground — diverting and brief, but not entirely necessary. And the romance-under-fire subplot between Segal and Berger, while generally well played and absolutely necessary to the plot, felt a bit pro forma in its details. But overall this one really clicked with me, delivering some effective, old school cloak-and-dagger goods. 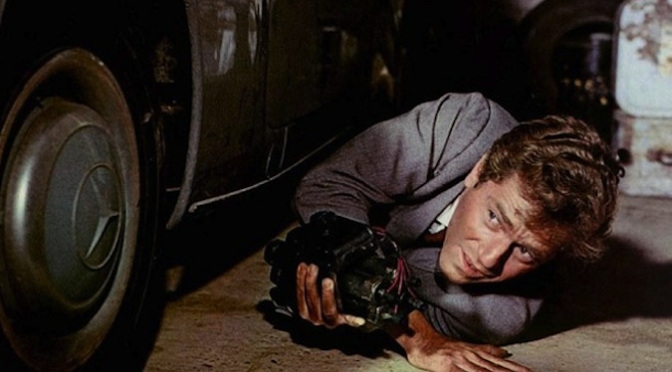