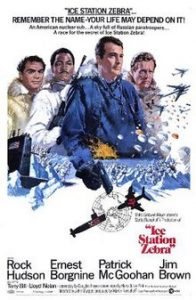 The Cold War gets very cold indeed in Ice Station Zebra (1968), a glacially slow military suspenser from director John Sturges, who also directed the magnificent war film The Great Escape. Alas, he doesn’t do nearly as well here; this one landed pretty wide of the mark for me, despite a good premise and a couple of winning performances. In the end, I don’t think I would have rated it on my top 100 list.

In the wake of reports of a disaster at a North Pole weather installation, submarine commander James Faraday (Rock Hudson) receives orders to lead the rescue mission…but also to deliver a mysterious British passenger named Jones (Patrick McGoohan) to the site. Faraday knows right off the bat that the mission isn’t nearly as simple as it seems. Jones is obviously a British spook; a unit of U.S. Marines is added to the passenger list; and later, two other additions are airlifted to the sub, an affable Russian defector (Ernest Borgnine) and a hard-nosed marine captain recently re-deployed from southeast Asia (Jim Brown). Faraday’s chief task is to safely deliver the expedition to the endangered Ice Station Zebra — by travelling underneath the icepack — but he also has to deduce from his unusual guests just exactly what is going on. Clearly espionage is afoot, but what exactly is at stake, and who’s on which side?

Somewhere in Ice Station Zebra is a subtle, suspenseful Cold War adventure struggling to find its way out. But this is a film in desperate need of an editor, with long, tedious gaps between story-advancing plot points. Coming in at two-and-a-half hours, it really should be about an hour shorter — it feels like an ill-considered director’s cut of an otherwise more effective and streamlined film. Broken into two acts — there’s an intermission! — the first focuses on slowly, methodically setting up the situation, and depicting the journey to the North Pole. This provides some impressive seaborne cinematography, and gives the likeable Hudson and the engagingly cynical McGoohan a chance to butt heads while trying to scrape information out of each other. But it’s mostly just a plodding underwater travelogue on a submarine populated by interchangeable military automatons. The second half deploys the team to the North Pole station, where the mysteries are finally solved, but somewhat clumsily. The climactic standoff overstays its welcome by a good twenty minutes, and isn’t convincingly executed.

It’s certainly not an unattractive film; with the exception of some poorly executed special effects, the look of the film is often impressive. Composer Michel Legrand’s score heroically attempts to inject energy into often-static proceedings. And the overall idea and story arc aren’t bad at all, on paper. But overall this one was a dud for me, handicapped at every stage by poor pacing.

A scene from Ice Station Zebra