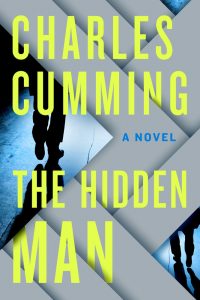 The “hidden man” of the title is Christopher Keen, a retired MI6 spook now in the private sector, whose intelligence career tore apart his family, destoying his marriage and leaving his two sons, Ben and Mark, with hard feelings toward their father. As the novel begins, Keen has reappeared in their lives and is trying to reconcile things. His efforts meet with mixed results, however. Mark, who happens to work for an international company Keen was gathering information on in his new job, is intrigued, and rebuilding the shattered relationship. But Ben, a headstrong artist struggling to hold together a touchy marriage with his wife Alice (an ambitious journalist), is a tougher sell. The family dramas, of which there are many, are only complicated by the gradual intrusion of MI-5; Mark’s employer is under investigation for possible ties to the Russian mafia and money-laundering. An MI-5 officer named Taploe has seized on the old hand Keen as a potential agent in his investigation, which eventually drags the entire family into the mix, with drastic consequences.

Like Cumming’s first novel, The Hidden Man is a smooth and flowingly written book populated by believable, distinctive characters. But where A Spy By Nature is a mostly focused, first-person narrative telling one person’s story, The Hidden Man is a much different animal. Told in third-person omniscient, the story ricochets in and out of its cast’s viewpoints, telling a broader, more complicated tale and splitting its focus between a complex spy plot and an intricate web of family relationship dramas. Cumming clearly enjoys drawing parallels between the life of the spy and the lives of “regular people,” and he works that theme very well again here, as espionage bleeds into the day-to-day realities of his well-drawn characters. And of course there’s plenty of classic tradecraft, mystery, and adventure to be had, as the British secret world collides with international commerce, the Russian crime scene, and dredged up memories of western intelligence work in 1980s Afghanistan.