Collection: Getting to Know You by David Marusek 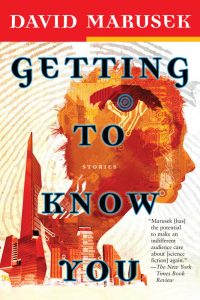 David Marusek’s short fiction has been a huge influence on me, and also for the vision of the fiction section of Futurismic, so it was with great pleasure – and a renewed sense of admiration – that I recently re-experienced the stories of his first collection, Getting to Know You (2007). Don’t get me wrong, I love his novels too; both Counting Heads and Mind Over Ship are very much worth reading. But some of Marusek’s short work is mind-blowingly good, powerful and innovative stuff that even ten or fifteen years after its publication still feels new and vibrant and important.

The collection leads off with Marusek’s most famous piece, “The Wedding Album,” a touching and highly creative novella told from the point of view of two recorded holosims, taken to commemorate a young couple’s wedding. Their semi-sentience serves as the window through which the reader views the evolution of artificial intelligence rights over decades of a deeply imagined future. It’s a sprawling, inventive opening to the collection, with more ideas in it than many SF novels. It’s very highly regarded, and it’s not even my favorite story in the book.

Not all of the stories on display here hit my sweet spot. I found “The Earth is On the Mend,” the author’s first sale, to be a not particularly memorable post-Apocalypse jape, and wasn’t hugely impressed with the grim lifeship tale “Listen to Me” either. Also “A Boy in Cathyland,” an out-take from “The Wedding Album,” was almost a bit too dense for me, and didn’t quite stand alone,  although it possesses some striking imagery and hard-hitting moments. On the other hand “Yurek Rutz, Yurek Rutz, Yurek Rutz,” an amusing story that gleefully commits the sins of a) being an epistolary and b) featuring the author as a character, worked for me with its sheer cleverness. And “My Morning Glory” is a brilliant little nod-and-a-wink short-short in which a man’s personalized apartment helps him negotiate life, dealing with the oncoming future one moment at a time.

The collection really comes alive for me in its middle stages, though, with a series of hefty stories that are perhaps the ones that cemented Marusek’s reputation. The astonishingly innovative “We Were Out of Our Minds With Joy” sets the stage for his Counting Heads universe (serving as the opening of that book), and although it came out in 1995, it still feels brand-spanking new to me, the kind of work that today’s new authors still strive to emulate. Even better, I think, are its prequels. “Cabbages and Kale, or: How We Downsized North America” goes back in time to examine the origins of this universe, in a story focusing on the vice president of the United States of North America, who finds himself in a unique position to change the future during a historic Senate vote. The ramifications of that event are examined somewhat in “Getting to Know You,” in which Marusek entertainingly details the birth of the personal valet (an A.I. assistant specifically tailored to the individual user), while also unravelling a compelling mystery as a former police officer visits her sister in a midwestern arcology. This story is both engagingly plotted and exciting as science fiction, further developing the author’s famous future history of power-mad, immortal elites, servile clones, and the endless bounty of nanotech.

Special mention must be made, however, for the shocking and brutal “VTV,” which the author’s note laments was received with “stone-cold silence,” but I think may be the author’s most impressive effort. In “VTV,” the callous machine of big media descends upon a woman suspected of being an assassination target and gleefully awaits the big event. The nightmare near-future depicted in “VTV” is so intense it’s almost gonzo, and yet this story really gets at hard truths in a disquietingly profound way. It’s a real kick in the teeth, a scathing indictment of exploitative media sensationalism, LCD voyeurism, and the fleeting, care-free attention span of the American public. I still think it’s a stunning, uncompromising work and an unjustly overlooked gem. If the past six years of Futurismic slushpile-reading is any indication, it may be the single most influential story in the book.

Getting to Know You contains a wealth of fiercely intelligent, dark, cynical, funny, and edgy SF, and may be a bit much for the feint of heart to take all at once. But to me it’s an absolutely essential SF collection.