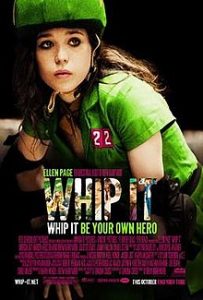 Women finally get a transcendence-through-sport film in the Rocky vein with Whip It (2009), an often funny if largely predictable comedy with a curious look and feel. Bliss Cavendar (Elliot Page) is a meek, wannabe alternative chick living a repressed small-town life in rural Texas under the conservative boot-heel of pageant-loving stage mother Brooke (Marcia Gay Harden) and conflict-averse football fan dad Earl (Daniel Stern). A stray encounter during an Austin shopping trip puts a roller derby tryout on Bliss’ radar, and on a whim, she sneaks off to give it a shot. Turns out she’s got a knack for the whole roller derby thing, and soon the waitress-and-loving-daughter by day is moonlighting as star jammer “Babe Ruthless” by night for the league’s worst team, the Hurl Scouts. She makes friends, finds love, and comes into conflict with her elders, as the Hurl Scouts climb out of the basement and challenge for the roller derby title.

Let’s face it, we’ve all seen this film before…it’s The Bad News Bears and The Mighty Ducks and so on and so forth. But for a change it puts women at center stage, and Whip It has a talented and funny cast that includes Drew Barrymore (who also directed the film), Alia Shawkat, and Kristen Wiig. I did spend most of the film trying to figure out what the hell era it was supposed to be set in…the film’s visual sense is such that you can’t figure out whether it’s 1970, 2009, or somewhere — anywhere — in between. Is this some sort of comment about the story’s timelessness…or maybe Texas? It’s  distracting, to say the least. Anyway, there’s little surprise here and I certainly wouldn’t send you way out of your way to see it, but it’s a well made and mostly enjoyable coming-of-age story with funny moments and good performances, particularly from Page (who is always worth watching) and Harden.