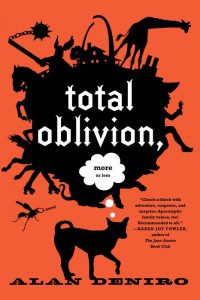 I’ve been feeling a little “two-note” in my fiction reading lately: spies and the near future, spies and the near future. I guess I’ve got that on the brain lately, what can I say? To shake things up a little, I picked up Total Oblivion, More or Less (2009) by Anya Johanna DeNiro, and I found it an enjoyable read and a nice change of pace. (Is that a wicked awesome title, or what?)

Macy Palmer is your typical sixteen-year-old girl, growing up in your typical midwestern city, experiencing your typical inexplicable invasion of ancient warriors into the contemporary world. That’s right, the Scythians have invaded Minnesota, civilization is breaking down, reality is all wobbly, and the Palmer family — Macy, father Carson, mother Grace, sister Sophia, and brother Ciaran — are displaced and desperate. A letter from Carson’s academic colleague in St. Louis provides a hint of promise, and together they set off from St. Paul down the Mississippi as passengers on the Prairie Chicken, refugees in their own country looking to forge a new life. Wasp-borne plagues, ancient warring factions, weird new drugs, and a bizarrely warped midwestern landscape challenge the family at every turn, and when they arrive at their destination, things only get more complicated. What’s a dysfunctional family to do?

This one started a bit slowly for me, but picked up nicely as it went along. I always find the technique of not using quotation marks for dialogue, which DeNiro deploys here, a bit distancing, and initially it had that effect. But after a few chapters I was onboard with it, and I think it contributes nicely to the surreal tone. The book has a dark, dry sense of humor and uniquely weird sensibility, creatively conflating fantasy, history, and reality in entertaining and frequently surprising ways. I didn’t find the plot particularly compelling – the first half of the book, in particular, seemed a bit weak in that area. But ultimately I decided it wasn’t really supposed to be a “plotty” book; the genre concepts and approach are on the experimental side, so I had more fun approaching it with short fiction reading protocols, searching for literalized metaphors (hmm, does indentured servitude in “Nueva Roma” equate to working in a cubical farm in the modern west?) or simply enjoying the quirky humor and darkly weird fictional landscape. Anyway, the story takes more complicated turns in the second half, which I found considerably more engaging. This one wasn’t quite was I expecting, which is exactly what I was looking for; I enjoyed it quite a bit.