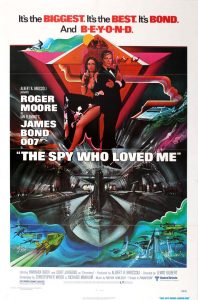 James Bond finally makes his first appearance on the list with The Spy Who Loved Me (1977). For someone as steeped in spy fiction as I am, you’d think I’d be pretty familiar with the Bond oeuvre, but I’m not — to be honest I’ve never much liked Bond. I’ve only seen a handful of the films, and evidently didn’t watch them all that carefully; this one I must have missed entirely.

When nuclear submarines go missing in the Atlantic, British intelligence brings in their best agent, James Bond (Roger Moore), to investigate. The only lead: a technology that enables the tracking of these highly classified subs, which is reported to be on the market in Cairo. Bond arrives in Cairo to put in a bid on the specifications, but immediately crosses paths with a rival Russian agent, the voluptuous Triple X (Barbara Bach), who is after the same thing. When the seller of the specs is killed, Bond and Triple X cooperate reluctantly at first against Jaws (Richard Kiel), a henchman of the technology’s developer, to recover the specs. This leads them to Sardinia and puts them onto Karl Stromberg (Curt Jurgens), the mega-rich supervillain of the piece, who has designs on triggering a nuclear holocaust so that, from his ocean headquarters Atlantis, he can rule a new post-apocalypse empire. Can Bond and Triple X, their initially reluctant alliance made official by their governments, prevent Armageddon?

The Spy Who Loved Me is a colorful, wish-fulfillment spy fantasy, and it’s not without its fun aspects. I liked the creative set designs, and some of the gadgetry is fun. The international location work is attractive, from its theme-park-like Austrian ski battles to its skulking Egyptian intrigues to its beautiful Mediterranean scenery. The production is lavish and, while it might not match up to today’s spectacles, it’s pretty impressive for its era.

But in the end, convert me to Bond fandom it didn’t. I mean, ultimately it’s just kind of silly. Silly, of course, is fine for campy spy fantasy, but I had a hard time getting invested in the adventure, because I just didn’t care about the one-dimensional characters. I so don’t relate to Bond. His smug, sexist superheroism and lame, “clever” one-liners, his casual success in the face of ridiculous odds; I just find the whole concoction a big turnoff. So while the action is fast and furious, I found it kind of uninvolving, because it’s so emotionally hollow. The dialogue is weak and the late-seventies soundtrack (shot through with snatches of Carly Simon and disco) is distractingly uneven. Diverting escapist moments aside, it just didn’t connect with me at all. I guess I just prefer my spies more human, more conflicted, and more likeable.

Defenders will probably accuse me of missing the point, that it’s all supposed to be glorious, cheesy fun, but if The Spy Who Loved Me is any indication, I may just not be wired for Bond. I’ll try to reserve judgement until I’ve seen the rest of the list’s Bond selections. 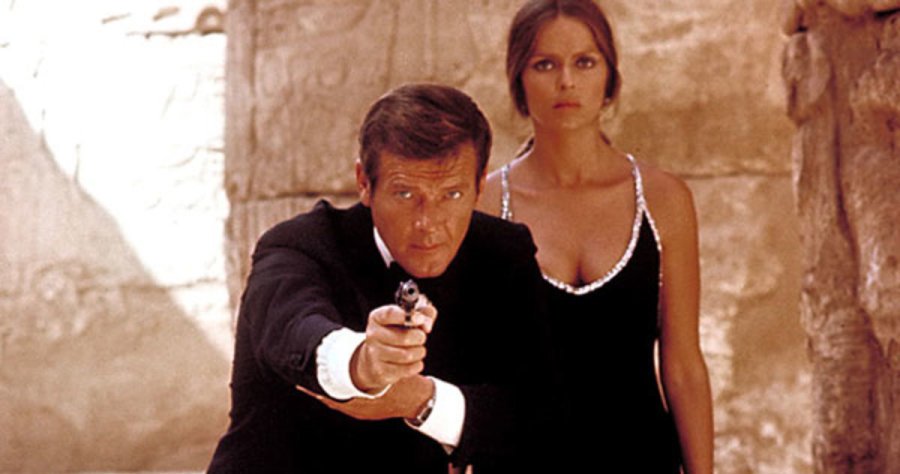