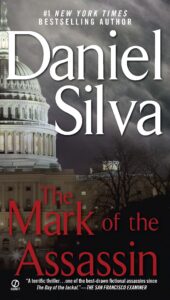 Daniel Silva is frequently mentioned on lists of the top-ranked spy novelists. A few years ago I read his first novel, The Unlikely Spy, a tale of historical espionage set during World War II, and found it  decent but unspectacular. I recall chalking up my disappointment mostly to the fact that the novel was so historically accurate that its plot failed to surprise if you were at all familiar with the history.

So I decided to give Silva a second try, moving on to his follow-up novel, The Mark of the Assassin (1998). Terrorists strike down a jetliner in New York, and in the aftermath, the suspected culprit is found murdered, adrift off the eastern seaboard. The attack is a national tragedy with immediate repercussions, both on government policy and a tight presidential election, but it also has personal resonance for CIA counterterrorist officer Michael Osbourne. A former field officer relegated to desk duty after his cover was blown, Osbourne recognizes the assassin’s killing style, and when other targets start dropping to “October’s”  bullets, it’s Osbourne who starts to put the pieces together.  Meanwhile, Osbourne’s wife Elizabeth finds herself in the thick of things as well, when her best friend, a reporter, winds up killed in what looks like a botched break-in. It’s all connected, of course, in an adventure that puts the couple onto a vast international conspiracy and eventually thrusts them into the assassin’s deadly path.

This one is more of an action-thriller than the kind of heady, paranoid mindbender I tend to prefer. The involved plot is well conceived, and the book progresses briskly; it feels much shorter than its five hundred pages. The action scenes are nicely clocked, and there’s some nice international scenery. In the right hands, it would probably make a pretty good movie.

But my overall reaction is lukewarm. The writing style didn’t always appeal to me – something repetitive and formulaic about the sentence structure – and the dialogue felt unconvincing at times. The machinations of the story were suitably complex, but I was never fully absorbed, I think because I had a hard time getting invested in the characters. The people all struck me as “types,” with the female characters – often a weakness in this genre, but more egregiously so here – particularly disappointing. Not that the men are all that much more developed, but at least they have lives, and fulfill plot functions that aren’t gender-related.

Silva is well regarded and certainly sells a lot of books, so obviously he’s doing a lot of things right, and despite my complaints I found the read generally entertaining. But ultimately I suspect his work just isn’t a perfect fit with me.